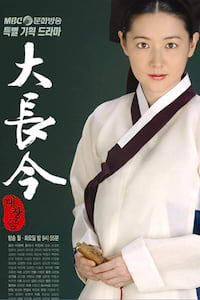 [About]
Dae Jang Geum, also known as Jewel in the Palace, is a 2003 South Korean historical drama television series directed by Lee Byung-hoon. It first aired on MBC from September 15, 2003 to March 23, 2004, where it was the top program with an average viewership rating of 45.8% and a peak of 57.1% (making it the 10th highest rated Korean drama of all time). Produced for US$15 million, it was later exported to 91 countries and has earned US$103.4 million worldwide, being known as one of the primary proponents of the Korean Wave by heightening the spread of Korean culture abroad.

Starring Lee Young-ae in the title role, it tells the tale of an orphaned kitchen cook who went on to become the King's first female physician. In a time when women held little influence in society, young apprentice cook Jang-geum strives to learn the secrets of Korean cooking and medicine to cure the King of his various ailments. It is based on the true story of Jang-geum, the first female royal physician of the Joseon Dynasty. The main themes are her perseverance and the portrayal of traditional Korean culture, including Korean royal court cuisine and traditional medicine