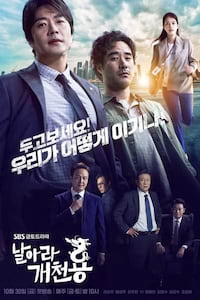 A high school graduate yet full of zest and keen sense of justice managed to pass the bar examination to be a qualified barrister-at-law against miscarriage of justice, an atypical but empathetic senior reporter and his passionate junior reporter, teamed up to defend and fight for judicial victims who are falsely accused, wrongfully convicted or malicious prosecution.

Inspired by true stories of real-life lawyer Park Joon-young and journalist Park Sang-kyu, who succeeded in obtaining retrials for people who had been wrongfully convicted, wherein a 1999 case in which three innocent people were convicted of robbery and murder, and in the 2000 murder of a taxi driver at the Yakchon five-way intersection in Iksan, North Jeolla Province.

[About:]
Delayed Justice  is a South Korean television series starring Kwon Sang-woo, Bae Seong-woo (replaced by Jung Woo-sung midway through the drama), Kim Ju-hyeon and Jung Woong-in. It aired on SBS TV from October 30, 2020 to January 23, 2021 every Friday and Saturday at 22:00 (KST). The director and producer of this drama told the media in a press conference that it is based on real-life actual events, though the incidents, names and places are altered.