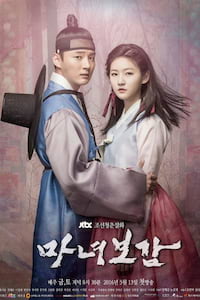 Queen Shim (Jang Hee-jin), is a royal queen in the palace who, unable to have a child, seeks the help of a shaman named Hong-joo (Yum Jung-ah) to give birth to a prince. Hong-joo told Queen Shim to deceive a young shaman named Hae-ran (Jung In-seon) who possessed special abilities enabling her to sleep with the king so she can become pregnant. Hong-joo then uses black magic to transfer the fetus to the Queen and plans to kill Hae-ran. Unfortunately, Hae-ran finds out everything, predicting the sad fate of the Queen's babies before dying. Queen Shim later gives birth to twins, Crown Prince Soonhwae (Yeo Hoe-hyun) and princess Yeon-hee (Kim Sae-ron), but was forced to abandon the princess due to the curse. With the help of Shaman Choi Hyun-seo (Lee Sung-jae), Yeon-hee grows up as a beautiful young girl, but she is forced to remain isolated and away from everyone, living in a house surrounded by talismans. Poong-yeon (Kwak Si-yang), Hyun-seo's son, has had a crush on her since he was young. A young scholar named Heo Jun (Yoon Shi-yoon), the son of a slave and a rich master, has a chance encounter with Yeon-hee and Heo Jun ties their fate as they journey together to lift the princess' curse which causes everyone she loves to die an awful death.

[About]
Secret Healer is a 2016 South Korean television series starring Yoon Shi-yoon, Kim Sae-ron, Lee Sung-jae, Yum Jung-ah and Kwak Si-yang. The story of the series is inspired by the book titled Dongui Bogam. It aired on cable network JTBC's Fridays and Saturdays at 20:30 (KST) time slot from May 13 to July 16, 2016 for 20 episodes.