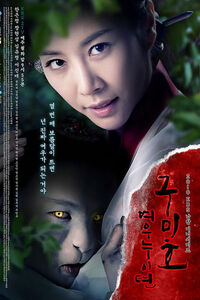 Set during the Joseon Dynasty, a beautiful gumiho (nine-tailed fox in Korean folklore) named Gu San-daek leaves her husband after he breaks his promise to marry her in their tenth year together, and his betrayal renders her unable to shapeshift. San-daek has a daughter, Yeon-yi. Born of a human father and a fox mother, the innocent young girl has yet to gain the ability to use her gumiho powers. The two cursed souls wander searching for a safe place to stay, and arrive at a village where they meet Yoon Doo-soo, a seemingly kind and gentle former official. But Doo-soo's daughter Cho-ok suffers from a mystical disease, and the only way to save her is to feed her the liver of a girl of the same age. When he realizes that San-daek and her daughter have no place to go, and that Yeon-yi is the same age as his daughter, he takes them in and awaits the perfect time to strike. But Doo-soo begins to fall for San-daek, and Cho-ok starts to envy her father's interest in the mysterious mother and daughter. Meanwhile, as Yeon-yi turns ten years old, her physical transformation begins, and thus the tale of love, betrayal, friendship and jealousy unfolds.

[About]
Grudge: The Revolt of Gumiho is a 2010 South Korean television series starring Han Eun-jung, Jang Hyun-sung, Kim Yoo-jung and Seo Shin-ae. It aired on KBS2 from July 5 to August 24, 2010 on Mondays and Tuesdays at 21:55 for 18 episodes.