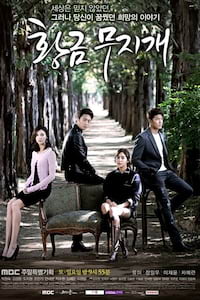 Adopted and raised by the same father, seven orphans grew up together as a family in a town near the ocean. With the bond between them even stronger than that of blood-related siblings, they experience hardships together and struggle to succeed in the marine products industry. It mainly revolves around a girl who was kept away from her mother by her father's mother. The mother asks her long time friend to steal her back. So he did. He got caught and went to prison for 6 years. The girl is back with the grandmother but 6 years later at an amusement park, she is kidnapped. She later on escapes and finds home with a boy and his grandmother. The grandmother later on dies and the longtime friend that stole her back the first time finds them trying to steal fish but keeps them as his own kids. He adds on 5 more kids later after them.