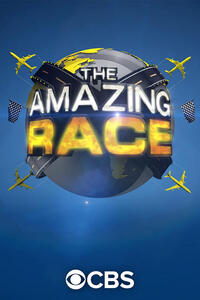 Reality-TV, Game Show
Be the first to rate this

The Amazing Race is an American adventure reality game show in which 11 or 12 teams of two race around the world (except the Family edition which featured 10 teams of four). The race is split into legs, with each leg requiring teams to deduce clues, navigate themselves in foreign areas, interact with locals, perform physical and mental challenges, and travel by airplane, boat, taxi, and other public transportation options on a limited budget provided by the show. Teams are progressively eliminated at the end of most legs, while the first team to arrive at the end of the final leg wins the grand prize of US$1 million. As the original version of the Amazing Race franchise, the CBS program has been running since September 2001. Numerous international versions have been developed following the same core structure, while the American version is also broadcast to several other countries.

The show was created by Elise Doganieri and Bertram van Munster, who, along with Jonathan Littman, serve as executive producers. The show is produced by Earthview Inc. (headed by Doganieri and van Munster), Jerry Bruckheimer Television for CBS Studios and ABC Signature (divisions of Paramount Global and The Walt Disney Company, respectively). The series has been hosted by veteran New Zealand television personality Phil Keoghan since its inception.

Since the inception of the Primetime Emmy Award for Outstanding Reality-Competition Program in 2003, The Amazing Race has won it ten out of nineteen times; the show has also won other awards and commendations. Although it has moved around several prime time slots since its inception, the program has averaged about 10 million viewers per season.