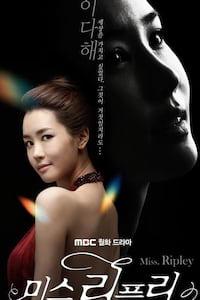 The series follows Jang Mi-ri, whose troubled past causes her to use greed and manipulation in her rise to the top, including manipulating the two men who love her, which leads to her downfall.

[About]
Miss Ripley is a 2011 South Korean television drama series, starring Lee Da-hae, Park Yoo-chun, Kim Seung-woo and Kang Hye-jung. Loosely based on Shin Jeong-ah's case, it aired on MBC from May 30 to July 19, 2011 on Mondays and Tuesdays at 21:55 for 16 episodes.