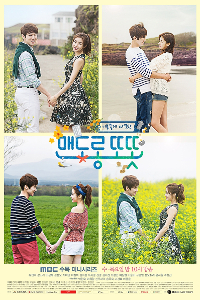 Lee Jung-joo has struggled and worked hard all her life, but has never caught a break, leaving her perpetually grouchy. In her seven years as an administrative employee at a clothing company in Seoul, she has never missed a day of work. But that doesn't stop her from losing her job, her house and her boyfriend in quick succession, so she unwillingly sets off to start a new life in Jeju Island.

There, she meets Baek Gun-woo, chef and owner of the restaurant "Warm and Cozy.". Jung-joo met Baek Gun-woo previously during their nineteenth birthday and mistaken that they are twins. Jung-joo first mistakes him for a con artist, because he can't seem to help himself from telling charming lies left and right. Gun-woo is a laidback romantic from a wealthy family who only does what he feels like doing, including opening a restaurant on Jeju simply because that's where he first met his first crush. Jung-joo and Gun-woo clash over their different personalities and priorities, then gradually fall in love with each other.

[About:]
'Warm and Cozy' is a 2015 South Korean television series starring Kang So-ra and Yoo Yeon-seok. Written by the Hong sisters as a twist on the fable of The Ant and the Grasshopper, it aired on MBC from May 13 to July 2, 2015 on Wednesdays and Thursdays at 22:00 for 16 episodes