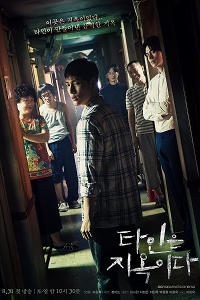 It tells the story of a young man, Yoon Jong Woo (Im Si-wan) in his 20s who moves to Seoul after landing an internship in a company. While looking for a place to stay, he stumbles upon Eden Studio, an ominous cheap dormitory and decides to stay there as he is low on money. Though not thrilled about the quality of the place and its abnormal residents, including his next-door neighbor Seo Moon Jo (Lee Dong-wook), he decides to tolerate it until he saves enough money to move out. However, mysterious occurrences start occurring in the studio, causing Jong Woo to start fearing the studio's residents.

[About:]
Strangers from Hell is a 2019 South Korean television series starring Im Si-wan and Lee Dong-wook. Based on the Naver WEBTOON webtoon series of the same name by Kim Yong-ki, it is the second series of OCN's "Dramatic Cinema" project which combines film and drama formats. It aired from August 31 to October 6, 2019.

The title is a reference to an often misinterpreted quote by Jean-Paul Sartre from No Exit.