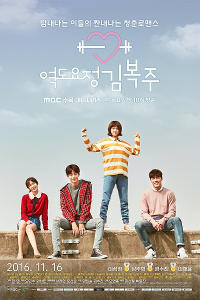 Kim Bok joo (Lee Sung-Kyung), a young woman chasing her dream of weightlifting on an athlete college campus, develops a crush on her friend Jung Joon-Hyung's (Nam Joo-Hyuk) older brother, Jung Jae-Yi (Lee Jae-Yoon). At first, Joon Hyung teases her and goes along with her act, even helping her, but soon finds himself falling in love with her. This series is a coming-of-age story about a group of college athletes who are fighting for their dreams, experiencing and finding love in the process, and growing every step of the way.

[About:]
Weightlifting Fairy Kim Bok-joo is a South Korean television series starring Lee Sung-kyung in the title role, with Nam Joo-hyuk. It is a coming-of-age sports drama, inspired by the life of Olympic gold-medalist Jang Mi-ran. It aired on MBC every Wednesday and Thursday at 22:00 (KST) starting November 16, 2016 to January 11, 2017.

The series resonated with the young demographic; although it averaged 4.6% in audience share and received the lowest viewership ratings in its time-slot throughout its run, it gained a cult following amongst young viewers and received mostly favorable reviews. The series also received popularity overseas, particularly in the Philippines.