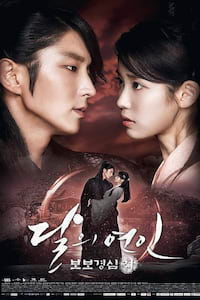 During a total solar eclipse, a 25-year-old 21st-century woman, Go Ha-jin (Lee Ji-eun), is transported back in time to the Goryeo Dynasty. She wakes up in the year of 941 in the body of Hae Soo, among the many royal princes of the ruling Wang family during the reign of King Taejo. She initially falls in love with the gentle and warm-hearted 8th Prince Wang Wook (Kang Ha-neul), and later Wang So (Lee Joon-gi), the fearsome 4th Prince who hides his face behind a mask and is given the derogatory label of "wolf dog". As the story develops, Hae Soo finds herself unwittingly caught up in palace politics and the rivalry among the princes as they fight for the throne.

[About:]
'Moon Lovers: Scarlet Heart Ryeo' is a South Korean television series based on the Chinese novel Bu Bu Jing Xin. It aired from August 29 to November 1, 2016 on SBS every Monday and Tuesday at 22:00 (KST) time slot for 20 episodes.

The series recorded an average nationwide rating of 7.6% for Nielsen Korea and 7.3% for TNMS, and was considered a failure for its performance below expectations. On the contrary, it performed well internationally and had over 1.1 billion views in China along with high ratings in Singapore and Malaysia. The drama has reportedly been sold for more than $400,000 per episode to the Chinese broadcasting station Youku, totaling over $8 million and thus became the most expensive K-drama ever sold. The record was beaten a few months later by Man to Man.