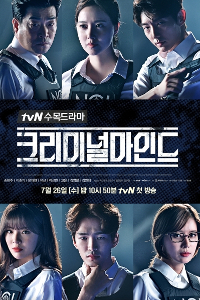 The drama follows a group of highly trained profilers in the fictional National Criminal Investigation (NCI) team who track down criminals to solve cases. It begins a year after a crucial error results in a bomb detonating at a hospital, killing several SWAT officers and leaving the NCI team leader Kang Ki-hyung's confidence badly shaken. He returns to work after a long break and is immediately drawn into a serial murder case which requires the NCI team to collaborate with the local police agency's Violent Crimes Unit. They meet the temperamental police officer Kim Hyun-joon, who appears to have a bitter grudge against Ki-hyung.

[About:]
'Criminal Minds: Korea' is a South Korean television series starring Lee Joon-gi, Son Hyun-joo, Moon Chae-won, Yoo Sun, Lee Sun-bin with Go Yoon and Kim Yeong-cheol. The drama is based on the American television series Criminal Minds. It was broadcast every Wednesday and Thursday from July 26, 2017, to September 28, 2017, on the cable channel tvN.