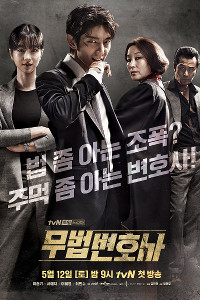 An adult Sang-pil leaves his lucrative practice in Seoul and returns to Kisung to bring those responsible for his mother's death to justice. He takes over a loan shark business and converts it into the Lawless Law Firm. Jae-yi is suspended from practicing law after assaulting a judge, loses her job, and also returns home to Kisung. She soon ends up working for Sang-pil, and later becomes his partner when reinstated as a lawyer. After learning the truth about Moon-sook, she joins Sang-pil in his pursuit of justice for the wrong done to their mothers. Together, they use the law to fight against Moon-sook and her associates. Over time, they fall in love.

Moon-sook and Oh-joo grow in influence and power through corrupt methods; Oh-joo becomes the mayor of Kisung and Moon-sook is nominated for chief justice in the Supreme Court. They and their associates oppose the Lawless Law Firm both inside and outside the courtroom by using underhanded tactics, including murdering Dae-woong and framing Sang-pil for it, bribing or threatening witnesses and assaulting Jae-yi. Despite the obstacles in their way, Sang-pil and Jae-yi succeed in revealing Moon-sook's crimes in court and successfully plead their case against her. Moon-sook and her associates end up in prison, whereas Oh-joo commits suicide. Jae-yi and Sang-pil then return to Seoul to help Prosecutor Cheon Seung-beom fight against corrupt officials.

[About:]
'Lawless Lawyer' is a legal thriller television series that ran in 2018 and stars Lee Joon-gi, Seo Yea-ji, Lee Hye-young and Choi Min-soo. The series was written by Yoon Hyun-ho and directed by Kim Jin-min. The series is set in the fictional city of Kisung which is described as lawless and corrupt.

The series follows characters Bong Sang-pil and Ha Jae-yi who form the Lawless Law Firm. Sang-pil, a former gangster turned lawyer, seeks to avenge his mother and fight against those with absolute power. He often resorts to using his fists and loopholes in the law to achieve his goals. Ha Jae-yi is a lawyer of high integrity who works with Sang-pil after she is suspended for assaulting a judge. Together they use the law to fight for justice against corrupt judge Cha Moon-sook and her associates.

Lawless Lawyer premiered on tvN on May 12, 2018. It concluded on July 1, 2018 with the airing of the 16th episode. The series was a commercial hit and became one of the most highly rated Korean dramas in cable television history.