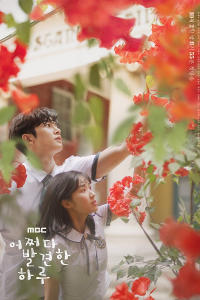 The series follows high school girl Eun Dan-oh (Kim Hye-yoon) who is a student at a prestigious academy. One day, by chance, she discovers that the world she lives in is a fantasy world of comics. She and everyone else are merely characters in a comic book entitled Secret, all under the authority of their omnipotent and omniscient Writer. Dan-oh is only an extra character and, worse, the Writer gave her a lame set-up: she is engaged to her long-time crush who despises her, and she has a heart disease and is expected to die soon.

Not satisfied with this fate, Dan-oh decides to forge her own destiny by changing the story's plot and finding her own true love. Her hopes of freeing herself from the Writer's control becomes stronger than before when she unexpectedly meets nameless Student Number 13 (Rowoon). But as the events around Dan-oh and Number 13 gradually starts to have parallels with the Writer's previous work Neungsohwa, changing her destiny could have a price to pay.

[About:]
Extraordinary You is a 2019 South Korean television series starring Kim Hye-yoon, Rowoon, Lee Jae-wook, Lee Na-eun, Jung Gun-joo, Kim Young-dae and Lee Tae-ri. It is based on the webtoon July Found by Chance which was first published in January 2018 on Daum Webtoon. The series aired on MBC TV's Wednesday-Thursday 21:00 KST time slot from October 2 to November 21, 2019.