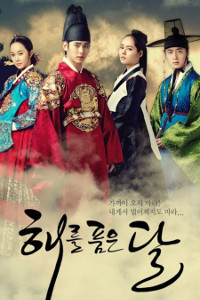 The Queen Mother orders the assassination of her stepson to protect her own son's ability to become king. Ari, a shaman of the Royal Star Mansion (Royal Astrology House), witnesses the murder. The pregnant wife of the palace's Chief Scholar helps her escape, and Ari vows to protect her unborn child, who has a "noble fate."

Ari is arrested, tortured, and imprisoned. She tells her friend and fellow shaman, Jang Nok-yeong, to look after the unborn child in her stead. Ari is declared guilty of treason and killed.

Yeon-woo, the unborn child Ari swore to protect, and Crown Prince Lee Hwon fall in love. Prince Yang Myung, the Crown Prince's half-brother, has also fallen in love with Yeon-woo, who does not reciprocate his feelings.

The Queen Mother seeks to promote Bo-kyung, the daughter of the Prime Minister and her blood relative, to be the Crown Princess in order to maintain her clan's power. However, the King is impressed by Yeon-Woo's intelligence and chooses her over Bo-Kyung, infuriating the Queen Mother and Prime Minister Yoon.

The Queen Mother secretly orders Nok-yeong to cast a deadly curse on Yeon-woo so that Bo-kyung can take her place.

Yeon-woo is diagnosed with an unidentifiable illness, expelled from the palace, and loses her title as Crown Princess. She "dies" from this illness and is buried. Nok-yeong digs Yeon-woo out of the grave; the spell is temporary and only mimics the appearance of death. However, Yeon-woo is so traumatized by being buried alive that she has lost all of her memories. She and Nok-yeong leave the capital.

Crown Prince Lee Hwon is unwillingly married to Bo-kyung. He refuses to consummate the marriage by citing an unnamed illness; he broods over his "dead" first love, Yeon-woo.

Eight years later, Lee Hwon is now king. Yeon-woo is now Shaman Wol (which means "moon"); unaware of Wol's true identity, the Queen Mother calls her to the palace so that she can cure the King's "illness." The King is struck by Wol's unmistakeable resemblance to Yeon-woo, and he quietly launches an investigation into Yeon-woo's death. Meanwhile, Wol struggles to understand the strange memories of her life as Yeon-woo, which she interprets as shamanic visions. Wol must fight Queen Bo-Kyung, the Queen Mother, and Prime Minister Yoon in order to reclaim her rightful place as the Queen of Joseon. Political intrigue continues to build and comes shockingly to a head as King Lee Hwon fights for his throne, fights for the woman he loves, and fights for his very life.

[About:]
'Moon Embracing the Sun' also known as The Moon that Embraces the Sun or The Sun and the Moon is a 2012 South Korean television drama series, starring Kim Soo-hyun, Han Ga-in, Jung Il-woo and Kim Min-seo. It aired on MBC from January 4 to March 15, 2012, on Wednesdays and Thursdays at 21:55 for 20 episodes.

The historical-fantasy drama is adapted from the novel of the same name written by Jung Eun-gwol. It tells of a secret, poignant love story between a fictional king of the Joseon Dynasty and a female shaman against the backdrop of a Korean traditional palace; and the conflicts and conspiracy of vying political powers.

The drama reached a peak rating of 42.2%. It won the Best Drama and Best Actor awards in the television category at the 48th Baeksang Arts Awards, and multiple awards at 2012 MBC Drama Awards, including Drama of the Year.