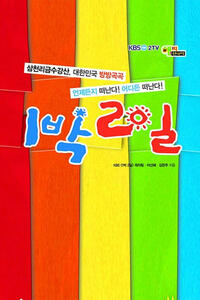 Although there were multiple member line-up changes through each season, 1 Night 2 Days has mostly kept its format. The cast members take various trips throughout South Korea, including many offshore islands. While doing so, members also perform missions at a certain mealtime or point of the day to earn rewards (ex. foods that are famous in the region they visit) and to avoid punishments (ex. going into the water). Guests can be invited not only by the production team but also by the members themselves if they meet the criteria of the episode's concept.

[About:]
2 Days & 1 Night is a South Korean reality-variety show that airs on KBS2 beginning August 5, 2007. 1 Night 2 Days is one of the two segments (the other segment is The Return of Superman) on Happy Sunday, airing at 6:25pm KST once a week. The episodes are also uploaded with English subtitles weekly on YouTube through KBS World's official channel. The show's current cast members are Kim Jong-min, Yeon Jung-hoon, Moon Se-yoon, Kim Seon-ho, DinDin and Ravi (VIXX). The show's motto is "Real Wild Road Variety." Its main concept is to recommend various places of interest that viewers can visit in South Korea. Filming for every new trip is usually done 2 weeks prior to broadcast on KBS2.

1 Night 2 Days has gained much popularity and has garnered high viewer ratings. Along with The Return of Superman, the show's third season helped revive and maintain KBS2 Happy Sunday ratings, beating out competition from other major networks since its first episode.