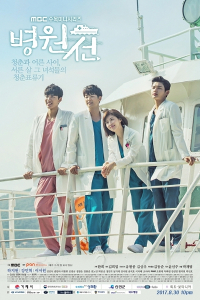 The story is about a group of young doctors who provide medical care to the locals who live in rural villages via a hospital ship that sails around the little islands.[cont.]

[About:]
'Hospital Ship'  is a South Korean television series starring Ha Ji-won and Kang Min-hyuk. The series is directed by Park Jae-bum and written by screenwriter Yoon Sun-joo. It aired on MBC every Wednesday and Thursday at 22:00 (KST) and started on August 30, 2017.