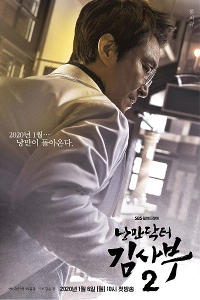 Dr. Romantic is a 2020 South Korean television series starring Han Suk-kyu as the title character alongside Ahn Hyo-seop, Lee Sung-kyung and Kim Joo-hun. It is the sequel to the 2016 series Dr. Romantic. It aired on SBS TV on Mondays and Tuesdays at 21:40 (KST) time slot from January 6 to February 25, 2020. It is available for streaming on Netflix from October 23, 2020.

Three years following the events of Dr. Romantic, Kim Sa-bu (Han Suk-kyu) comes to Geosan University Hospital to recruit a general surgeon. He finds Seo Woo-jin (Ahn Hyo-seop), a doctor with a troubled past who is ostracized by his fellow doctors, and offers him the job. In the meantime, Cha Eun-jae (Lee Sung-kyung) is suspended after making another mistake in the operation room and has no other choice but to follow the two doctors to Doldam Hospital.