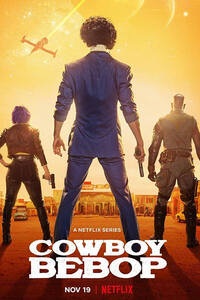 The series focuses on the adventures of a ragtag group of bounty hunters chasing down criminals across the solar system.

[About]
Cowboy Bebop is an upcoming American science fiction streaming television series. It is a live-action adaptation of the Japanese anime series Cowboy Bebop. The series is set to be developed by André Nemec, written by Christopher Yost, and stars John Cho, Mustafa Shakir, Daniella Pineda, Alex Hassell, and Elena Satine. The series consists of 10 episodes.