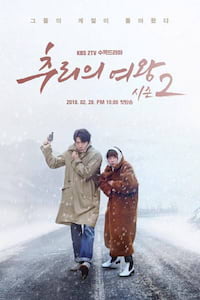 Housewife-turned-investigator Seol-ok and passionate detective Wan-seung collaborate to solve mysterious cases and cure the hearts of those who were wounded by crimes along the way. Queen of Mystery Season 2 is a drama that digs into the inside details of daily crimes realistically about a murder next door and sexual assault crime that happened in a blind alley last night instead of dealing with a psychopath or notorious serial killer, etc.

[About]
Queen of Mystery 2 is a South Korean television series starring Choi Kang-hee and Kwon Sang-woo. It aired on KBS2 from February 28 to April 19, 2018 on Wednesdays and Thursdays at 22:00 (KST) for 16 episodes.