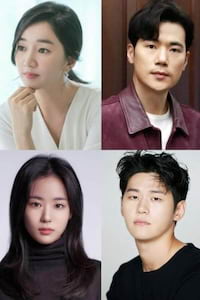 A psychological mystery thriller that tells the story of things which lose their meaning when greed and power comes into play. A big conglomerate, Sungjin Group, having clout over political and financial circles in South Korea owns an art museum “Space Jin”. Yoon Jae-hee (Soo Ae), second daughter-in-law of the family, is in-charge of the art museum. She hates poverty so she ditches her long-time lover and marry Jung Joon-hyuk (Kim Kang-woo), an illegitimate son of Sung Jin Group. She even fights Sungjin Group to make her husband the country's president, with the help of future Public Prosecutor General. Apparently the husband poses as if he has no such ambition but inside he waits for the day when he can have the control.

[About]
Sabotage City is an upcoming South Korean television series directed by Jeon Chang-geun and starring Soo Ae, Kim Mi-sook, Kim Kang-woo and Lee Hak-joo. This psychological series is about a society whose characters have different desires and psychology, which pushes them to conceal their dark sides. It is scheduled to premiere on JTBC in second half of 2021.