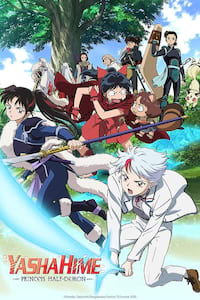 Many years after the events of Inuyasha, Sesshōmaru's and Rin's daughter four-year-old Towa is separated from her younger twin sister Setsuna and gets stranded in the modern era, where she is adopted into Kagome Higurashi's family, raised by her younger brother Sota and his wife Moe.

Ten years later, Towa is reunited with Setsuna, who came to the modern time through the vast power of the Sacred Tree of Ages. During their separation, Setsuna became a hardhearted demon-slayer working under Kohaku and does not remember her past as they and her dreams were stolen by the mythical Dream Butterfly. In order to restore them, the half-demon twins embark on an adventure while accompanied by their quarter-demon bounty hunter cousin Moroha, who is the feisty, hard-as-nails teenage daughter of Inuyasha and Kagome Higurashi, and also has no memory of her parents.

The spirit of the Sacred Tree of Ages reveals itself to the cousins, warning them that an old rival of their paternal dog-demon grandfather is planning on warping time since Sesshomaru refuses to fight him. At the same time, it is holding Rin in stasis for Sesshomaru because of her unusual connection to Lady Zero, the elder sister of Lord Kirinmaru, and creator of the seven mystical Rainbow Pearls, whose respective demonic powers equal those of the Shikon Jewel.

[About]
Yashahime: Princess Half-Demon is a Japanese anime television series produced by Sunrise. It is a sequel to the Inuyasha anime series, which itself is based on the original manga series written and illustrated by Rumiko Takahashi. It is the story of Towa Higurashi and Setsuna, Sesshomaru and Rin's twin daughters, and Moroha, Inuyasha and Kagome Higurashi's teenage daughter. The series aired from October 2020 to March 2021. A second season is set to premiere in October 2021.