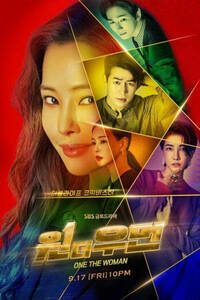 Cho Yeon-joo (Lee Hanee), a rouge prosecutor gets into a car accident. When she wakes up from a coma, her life changes as she is swapped with that of the youngest daughter of a chaebol, Kang Mi-na, also the daughter-in-law of BK Group, who just looks like her. Han Seung-wook Lee Sang-yoon is a chaebol, who still cherishes his first love. He left Korea because he felt the savagery of a fight for inheritance. He comes back to find the truth behind his father’s sordid death. Whe he meets his first love by chance, he does not want to lose her again.

[About]
One the Woman is an upcoming South Korean romantic comedy television series. It is directed by Choi Yeong-hoon on script of Kim Yoon and starring Lee Sang-yoon, Lee Hanee and Lee Won-geun. The series is about finding the memory of a corrupt prosecutor, who due to memory loss accidentally changes her life with the daughter-in-law of a conglomerate who looks just like her. It is slated to premiere on SBS TV in September 2021 and will air every Friday and Saturday at 22:00 (KST)