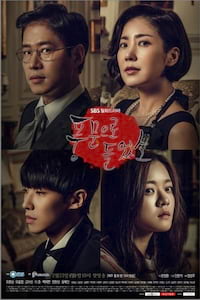 Heard It Through the Grapevine (2015)

Heard It Through the Grapevine is a black comedy that satirizes the way of life of Korea's upper class, who wield enormous power and thrive on inherited wealth and lineage.

Han Jeong-ho (Yoo Jun-sang), and Choi Yeon-hee (Yoo Ho-jeong), are a wealthy couple from a prestigious family. Their reputation is suddenly turned upside down because their teenage son, Han In-sang (Lee Joon), impregnates his girlfriend from an ordinary family, Seo Bom (Go Ah-sung). Bom is determined to endure being isolated from her own family and humiliation from her in-laws for the sake of her child's future, while In-sang struggles between his love for Bom and his family's high expectations.

[About:]
Heard It Through the Grapevine is a 2015 South Korean television series starring Yoo Jun-sang, Yoo Ho-jeong, Go Ah-sung, and Lee Joon. It aired on SBS from February 23 to June 2, 2015 on Mondays and Tuesdays at 21:55 for 30 episodes.