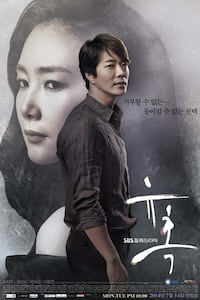 Cha Seok-hoon is a naive man who grew up a rural village in Gangwon Province. His intellect gets him into the country's top university despite his family's economic plight, and he takes on all sorts of part-time jobs, from quick services to construction work, in order to earn his tuition.

He then meets Na Hong-joo, a girl also from a poor family. Hong-joo is resigned to a miserable existence, until Seok-hoon brings happiness and hope into her life. They get married, and Hong-joo is a calm and understanding wife, always the first to sacrifice and make concessions. However, Seok-hoon finds himself plunged into massive debt due to a failed business venture with another partner.[cont.]

[About:]
Temptation is a 2014 South Korean television series starring Kwon Sang-woo, Choi Ji-woo, Lee Jung-jin and Park Ha-sun. It aired on SBS from July 14 to September 16, 2014 on Mondays and Tuesdays at 21:55 for 20 episodes. The drama reunites Choi Ji-woo and Kwon Sang-woo who both starred in the 2003 hit melodrama Stairway to Heaven.