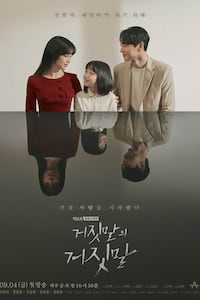 Drama, Mystery, Romance
Be the first to rate this

Ji Eun-soo is the daughter-in-law of a chaebol family who appears to have everything. Her life falls apart when she is accused of murdering her abusive husband and sentenced to ten years in prison. While in prison, she gave birth to a baby girl but is forced to give her up. She and her father reach out to Kang Ji-min, a journalist who suspected foul play behind Eun-soo's case and the only one willing to hear Eun-soo's side of the story. However, after a while, her letters to Ji-min are mysteriously returned while her father is later killed in a hit-and-run accident right before meeting Ji-min and Ji-min is sent on an overseas assignment just as he was getting closer to the truth. A determined Eun-soo tracks down her daughter upon her release and, in doing so, uncovers a complex web of lies and betrayal beginning with her former mother-in-law, CEO and respected businesswoman Kim Ho-ran.

[About:]
Lie After Lie is a South Korean television series starring Lee Yoo-ri and Yeon Jung-hoon. It aired on Channel A from September 4 to October 24, 2020, every Friday and Saturday at 22:50 (KST). The drama is also simulcast on Drama Cube, Dramax and Sky TV.

As of October 10, the drama has soared to a new all-time high in viewership. Going by Nielsen Korea, the latest episode of Lie After Lie scored average ratings of 5.8 percent nationwide and 6.3 percent in the Seoul metropolitan area, marking the drama’s highest ratings to date—and breaking its own record for the highest viewership ratings achieved by any drama in Channel A history. By the end of its run, the drama became one of the most highly rated Korean dramas in cable television history.