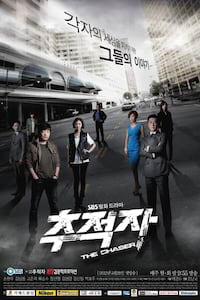 The series tells the story of Detective Baek Hong-suk, a happily married family man whose life is shattered when his 15-year-old daughter is killed in a car accident, causing his wife to go into a state of shock, eventually killing herself and leaving Hong-suk a widower. He later discovers his daughter's death was the result of a conspiracy led by politician Kang Dong-yoon, to secure his political future as a presidential candidate. Hong-suk goes from loving, doting father and cop to harrowed man hellbent on revenge, as Kang continues to rise in power. With the help of Kang's sister-in-law, a reporter, Hong-suk takes revenge against the man who ruined his life.

[About]
The Chaser is a 2012 South Korean television drama series about a grieving father out for revenge against corrupt officials.

Despite no hype or big stars, the thriller gave a strong performance in the ratings, ending its run at 22.1% (number one in its timeslot). Its rise in popularity was based on the tightly written and well-structured storyline, solid direction, and cast members' acting skills.