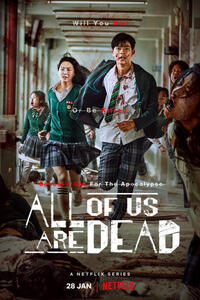 The story of a group of students stuck in their school during a zombie apocalypse.

[About:]
All of Us Are Dead is an upcoming South Korean television series starring Yoon Chan-young, Park Ji-hoo, Cho Yi-hyun, Park Solomon and Yoo In-soo. Based on the Naver webtoon Now at Our School by Joo Dong-geun, which was published between 2009 and 2011, the series is set to be released by Netflix in 2021.