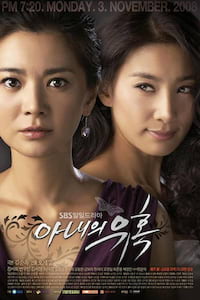 Goo Eun-jae (Jang Seo-hee) graduated as a make-up artist major at a university and began preparations to study in France. Her dreams to study abroad are halted by pregnancy after Jung Gyo-bin (Byun Woo-min) takes advantage of her when she was drunk. She decides to marry him and give up on her dreams in order to be a responsible mother to her unborn child. Eun-jae's pregnancy soon meets with a tragic miscarriage when she tries to protect her mother in law, Baek Mi-in (Geum Bo-ra), when she was pushed down the steps by a creditor of the said in-law. Eun-jae falls and loses her baby. It takes a long time until Eun-jae becomes pregnant again. Around this time, Shin Ae-ri (Kim Seo-hyung) returns from her five-year-long studies from France where she studied make-up. [cont.]

[About]
Temptation of Wife, also called Lure of Wife, was a highly watched drama in South Korea broadcast by SBS. It began airing in 2008 and ending on May 1, 2009. Despite many controversies concerning the questionable content of the drama, it remains one of the most viewed dramas with a daily average viewership of around 30%, and netted the cast several awards including the Daesang (Grand Prize) for lead actress Jang Seo Hee at the SBS Drama Awards. It aired on SBS from November 3, 2008, to May 1, 2009, on Mondays to Fridays at 19:20 for 129 episodes.

The series was a part of the "Wife Trilogy," which includes Two Wives and Wife Returns. The series had two remakes by China and Philippines and 2009 series Temptation of an Angel starring Bae Soo-bin.