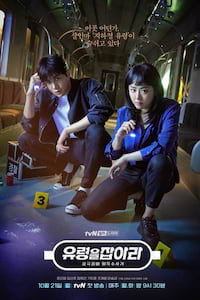 Yoo Ryeong became a police investigator in order to find her missing twin sister. She was disappointed because the report of losing her sister was ignored by Ha Ma-ri, the police officer at that time. She thinks her sister has been the victim of serial murder by the Subway Ghost. She does not always follow the rules as she strongly believes in justice.[cont.]

[About:]
Catch the Ghost is a 2019 South Korean television series starring Moon Geun-young and Kim Seon-ho. It aired on tvN from October 21 to December 10, 2019.