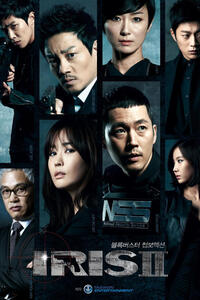 IRIS II: New Generation explores the aftermath events of IRIS as well as Athena: Goddess of War. The story explores the origins of the former Director of the NSS and IRIS agent, Baek San (Kim Yeong-cheol), and the protagonist Jung Yoo-gun (Jang Hyuk). After agent Kim Hyun-jun (Lee Byung-hun) was killed by a sniper shot from IRIS agent Ray (David Lee McInnis), IRIS went into remission to recover and reconnoiter. Three years have since passed and NSS is no longer a secret black-ops division as it once was; it is now a public entity to the world. However, the National Security director, who became NSS's oversight (who never approved of NSS's existence due to Baek San's abuse of power), reduced the organization's abilities and limited it to regulating and controlling federal crime, like shutting down an arms smuggling ring. It is during that time that the current director of NSS, takes note of Officer Jung Yoo-gun, and has him train a new group of NSS agents to manage future national threats.