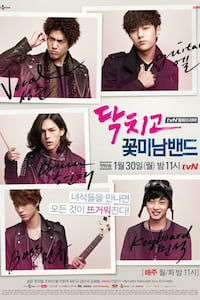 Joo Byung-hee (Lee Min-ki) is the crazy, free-spirited leader and vocalist of the popular underground rock group, Eye Candy. Joining him is Kwon Ji-hyuk (Sung Joon), chic Lee Hyun-soo (L), playboy Kim Ha-jin (Yoo Min-kyu), silent Jang Do-il (Lee Hyun-jae) and baby-faced Seo Kyung-jong (Kim Min-seok). When their delinquent-ridden school is forced to close down, they debate whether it's even worth returning to high school at all. However, due to an outside confrontation with their new school's current ruling band, Strawberry Fields, Eye Candy decides to attend Jungsang High out of spite so they can rule the school once again. Joo Byung-Hee finds his muse in Jungsang High School and dreams of performing in a music festival. They overcome their various economic difficulties to earn themselves the Jungsang High School uniform and finally are able to enter. By taking inspiration from his blossoming relationship, Byung-hee finally finishes his composition for the festival. Tensions flare between Eye Candy and Strawberry Fields, leading to violent encounters. [cont.]

[About]
Flower Band (Shut Up Flower Boy Band) is a 2012 South Korean television series starring Sung Joon, Jo Bo-ah, L, Jung Eui-chul, Lee Hyun-jae, Yoo Min-kyu, and Kim Min-seok. It is a coming-of-age story about a high school rock band dealing with friendship, rivalry, romance and their passion for music. The series aired on tvN from January 30 to March 20, 2012 on Mondays and Tuesdays at 23:00 (KST) for 16 episodes.

The series is the second installment of tvN's "Oh! Boy" series of Flower Boy programming targeted at the teenage demographic, preceded by Flower Boy Ramyun Shop in 2011 and followed with Flower Boys Next Door in 2013 and Dating Agency: Cyrano in 2014.