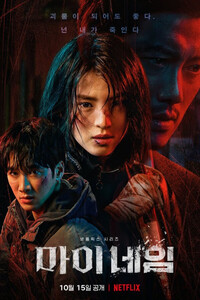 Yoon Ji-woo's father dies suddenly. She wants to desperately take revenge on whoever is responsible for her father's death. Yoon Ji-woo works for drug crime group Dongcheonpa. Choi Moo-jin is the boss of the drug gang. With the help of Choi Moo-jin and to uncover the reason for her father's death, Yoon Ji-woo joins the police department and becomes a mole for the drug group. Yoon Ji-woo is assigned to work in the drug investigation unit in the police department. Her partner there is Detective Jeon Pil-do.

[About]
My Name is an upcoming South Korean television series directed by Kim Jin-min and starring Han So-hee, Park Hee-soon, and Ahn Bo-hyun. The series revolves around a woman who joins a gang to avenge her father's death then goes undercover as a cop. It is scheduled to be released on Netflix on October 15, 2021. It will be screened at 26th Busan International Film Festival in newly created 'On Screen' section, to be held from 6 to 15 October 2021.