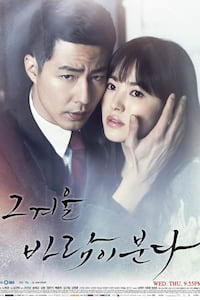 A melodrama about a handsome man and a beautiful blind woman who doesn't believe in love. Oh Soo is an orphan who is left heartbroken after his first love dies. He leads a goal-less life as a high-stakes gambler with a 99.9% winning probability. Oh Young is a lonely heiress who is visually impaired and lives alone without family. The two learn the true meaning of love after meeting each other.

[About:]
That Winter, the Wind Blows is a 2013 South Korean romantic melodrama television series starring Jo In-sung and Song Hye-kyo. A gambler and con man (Jo) pretends to be the long-lost brother of a blind heiress (Song), but these two damaged people come to find the true meaning of love after getting to know each other.

The series is based on the Japanese drama I Don't Need Love, Summer that aired on TBS in 2002, and was previously adapted into the 2006 Korean film Love Me Not. This 2013 Korean drama adaptation was written by Noh Hee-kyung and directed by Kim Kyu-tae.