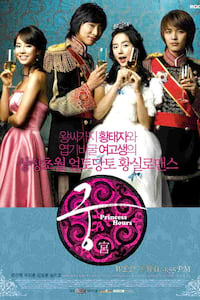 The show is set in an alternate, 21st-century Korea which has retained its monarchy and imperial family since 1945. The series focuses on the lives of Crown Prince Lee Shin of Korea, and his new bride, Chae-kyeong.

[About]
Princess Hours is a 2006 South Korean television series, starring Yoon Eun-hye, Ju Ji-hoon, Kim Jeong-hoon and Song Ji-hyo. It is based on Korean manhwa Goong by Park So-hee. It aired on MBC from January 11 to March 30, 2006 on Wednesdays and Thursdays at 21:55 for 24 episodes.

The show was the tenth most popular drama of 2006, with a peak rating of 28.3%. It also became a hit across Asia, contributing to the Korean Wave. Due to its success, a spin-off series, Prince Hours, was broadcast in 2007.