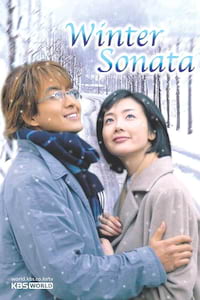 The story begins when Joon-sang (Bae Yong-joon), the son of an eminent musician, moves to Chuncheon, a rural city in South Korea. As an extraordinarily talented student, Joon-sang is welcomed by his fellow students as well as his teachers, but remains a quiet, introverted teenager. As a result of the belief that his biological father is dead, and serious disagreements with his mother, Joon-sang believes that no one truly loves him.  [cont.]

[About]
Winter Sonata is a 2002 South Korean television drama series, starring Bae Yong-joon and Choi Ji-woo. It is the second part of the season-themed tetralogy Endless Love drama series directed by Yoon Seok-ho. Filming primarily took place on the resort island of Namiseom and Seoul. It aired on KBS2 from January 14 to March 19, 2002, on Mondays and Tuesdays at 21:55 (KST) for 20 episodes.

The series is widely considered to be the Korean drama that launched the Korean Wave throughout Asia and worldwide. It has also been adapted into an anime series and a stage musical.