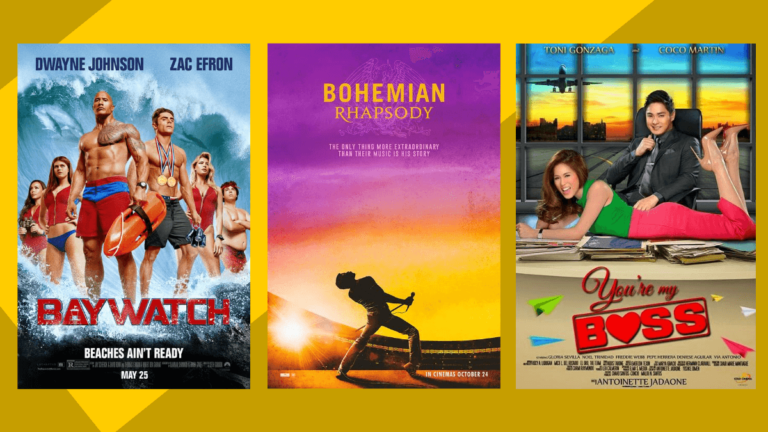 Isn’t it a bummer when you see your favorite movie already playing halfway through when you turn on the TV? Fret not! From rom-com and action to horror and thriller, we’re giving you a heads up on all the must-watch movies on TV from July 27 to August 2, 2020.

1. Angel Has Fallen
(1pm, HBO)
Mike Banning, a secret service agent, is assigned to protect the US president. Things take a turn when Mike is falsely accused of carrying an attack on the president while on a fishing trip.

2. Baywatch
(4:50pm, FOX Movies)
Lifeguard Mitch Buchannon and his team discover a drug racket involving businesswoman Victoria Leeds and decide to unearth the truth and bring the perpetrators to justice.

3. Forrest Gump
(5:10pm, HBO)
Forrest, a man with low IQ, recounts the early years of his life when he found himself in the middle of key historical events. All he wants now is to be reunited with his childhood sweetheart, Jenny.

4. A Moment In Time
(7pm, Cinema One)
A high-spirited guy working as a waiter and painter meets a shy violinist from a rich family, and love blossoms — until a dark secret is revealed.

5. Rise Of The Planet Of The Apes
(7:15pm, Cinemax)
Caesar, a chimpanzee, has been with Will ever since he was born, and, with a new drug, he can think and react like humans. When Caesar finds himself subjected to injustice, he decides to revolt.

1. The Mask Of Zorro
(9:20am, Cinemax)
Don De la Vega sets out as the Zorro to avenge his wife’s murder and find his daughter. During his mission, he is aided by his successor, Alejandro, who also has his own agenda.

2. Taken 2
(11:15am, HBO)
Bryan Mills, a former CIA agent, and his ex-wife, Lenore, are taken hostage by a ruthless gang in Albania. However, his daughter Kim helps Bryan break free and rescue Lenore.

3. ABNKKBSNPLAko? The Movie
(5:30pm, PBO)
An author recollects memories of his childhood to early student days until his few years at work.

4. Tooth Fairy
(6:20pm, HBO)
A hockey player breaks a little girl’s heart when he tells her that there is no tooth fairy. Soon, he is summoned to the fairy world and punished to serve two weeks as a real-life tooth fairy.

5. Beauty and the Bestie
(7pm, Cinema One)
Undercover agent Emman asks his former best friend Erika to take the place of an abducted beauty pageant contestant while he and his agency hunt for the kidnapping victim.

6. X-Men: Dark Phoenix
(7pm, FOX Movies)
After a mishap, Jean Grey is struck by a powerful ray of energy that she absorbs into her body, turning her into an uncontrollable liability for the X-Men.

7. X-Men: Days Of Future Past
(9pm, FOX Movies)
Wolverine travels back in time to stop Mystique from assassinating Bolivar Trask, whose death leads to the creation of the Sentinels, which are robots designed to kill mutants.

1. Pitch Perfect
(7:10am, HBO)
Beca, a college fresher, reluctantly joins an all-girls a cappella group and later infuses freshness into their repertoire. They then take on a male a cappella group in a competition.

2. You’re My Boss
(7pm, Cinema One)
A woman looking for acceptance, love, and appreciation finds what she is looking for from her personal assistant.

3. Mama
(11:05pm, FOX Movies)
After their parents’ deaths, two young girls are forced to reside in a house that has a dark and ominous presence. Even after getting rescued, the evil forces follow them to their new home.

1. The Social Network
(12:05pm, HBO)
Mark Zuckerberg creates a social networking site, Facebook, with the help of his friend Eduardo Saverin. But soon, a string of lies tears their relationship apart even as Facebook connects people.

2. Fast & Furious 8
(5:05pm, FOX Movies)
Dom encounters a mysterious woman, Cipher, who gets him involved in the world of terrorism. The crew has to reunite to stop Cipher and save the man who brought them together as a family.

3. Rogue One: A Star Wars Story
(5:40pm, Cinemax)
Jyn’s father is forcibly taken by the Galactic Empire to help them complete the Death Star. When she grows up, she joins a group of resistance fighters who aim to steal the Empire’s blueprints.

4. Feng Shui 2
(7pm, Cinema One)
Lester asks Joy for help in defeating the deadly consequences of the cursed Bagua mirror.

1. Harry Potter And The Sorcerer’s Stone
(1:25pm, HBO)
Harry Potter, an eleven-year-old orphan, discovers that he is a wizard and is invited to study at Hogwarts. Even as he escapes a dreary life and enters a world of magic, he finds trouble awaiting him.

2. Harry Potter And The Chamber Of Secrets
(3:55pm, HBO)
A house-elf warns Harry against returning to Hogwarts, but he decides to ignore it. When students and creatures at the school begin to get petrified, Harry finds himself surrounded in mystery.

3. Fantastic 4: Rise Of The Silver Surfer
(6:45pm, Cinemax)
The Silver Surfer, an intergalactic herald serving Galactus, plans to destroy the Earth for his master. However, four superheroes must intervene and battle the villainous force to save the planet.

4. Harry Potter And The Prisoner Of Azkaban
(6:55pm, HBO)
Harry, Ron and Hermoine return to Hogwarts just as they learn about Sirius Black and his plans to kill Harry. However, when Harry runs into him, he learns that the truth is far from reality.

5. Harry Potter And The Goblet Of Fire
(9pm, HBO)
When Harry is chosen as a fourth participant of the inter-school Triwizard Tournament, he is unwittingly pulled into a dark conspiracy that endangers his life.

6. Godzilla
(9pm, FOX Movies)
Ford and his father, Joe, find evidence pointing to the existence of giant creatures. When the creatures, classified as MUTO, surface, Godzilla, an ancient behemoth, rises to fight them.

1. Nancy Drew and the Hidden Staircase
(8:05am, HBO)
Modern, smart, and independent, Nancy Drew reluctantly befriends Helen, the local mean girl, and together they investigate the haunting of Twin Elms.

3. Ex With Benefits
(11pm, Cinema One)
A doctor is faced with his regrets when a med rep courting his business turns out to be an ex-girlfriend.

1. Thor
(11:40am, HBO)
Thor, a powerful god of Asgard, is banished to the Earth by his father for his recklessness. Stripped of his divine power, he joins the other members of S.H.I.E.L.D to save earth from a dark force.

2. Snakes On A Plane
(2:15pm, Cinemax)
Sean Jones, a witness, is a on a flight to LA to testify against a mob boss, Eddie Kim. However, Flynn, the FBI agent accompanying Sean, must save the passengers from a disaster.

3. The Peanuts Movie
(3:30pm, HBO)
Charlie falls for a red-haired girl, who moves into his neighbourhood, and tries to woo her. Meanwhile, his best friend Snoopy, with the help of his team, sets out to pursue his arch-rival, Red Baron.

5. Diary Ng Panget
(7:15pm, PBO)
A poor young woman becomes a personal maid for a rich and handsome young man. The two do not get along at first, but as their lives become entangled, their relationship becomes more complicated.