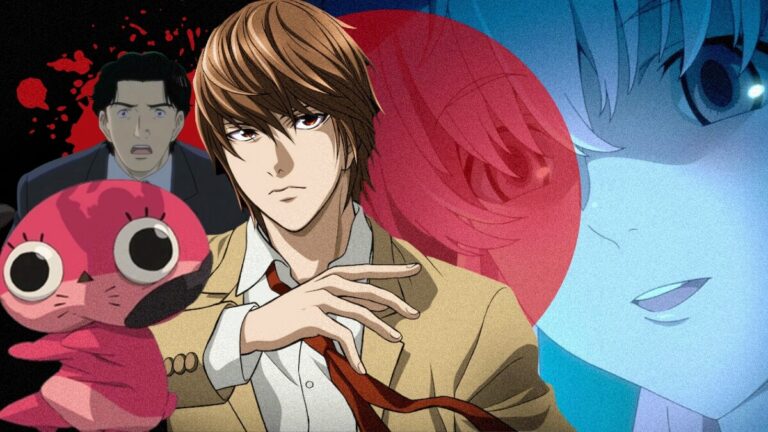 Here are some must-watch anime titles with psychological themes and hair-raising thrills that demand a place on your watchlist!

If you enjoy stories that keep you at the edge of your seat, shock you with mind-blowing plot twists, and chill your spine with its disturbing scenarios, chances are, you’re crazy for psychological thrillers. However, if you ever feel like you’ve exhausted the most popular movies, shows, and novels under the genre, then you might just be scratching the surface, because the anime scene have some of the most thrilling stories waiting for you to discover! On this list, we’ve rounded up some of the best anime with psychological themes and hair-raising thrills that demand a place on your watchlist!

Death Note is perhaps the most popular psychological thriller out there, having perfectly infused elements of the supernatural to a world that greatly reflects our own. It tells the story of the righteous high school student Light Yagami who picks up the Death Note– a notebook that could kill people just by writing down their names on its pages. With his genius mind and twisted sense of justice, Light starts killing off criminals using the notebook. But his killing spree is hindered by a mysterious detective known only as L, who challenges him on a battle of wits where the loser will either be killed or captured.

Monster has been around since the early 2000s but it remains to be an acclaimed title under the psychological thriller genre. It begins with the moral struggles of Dr. Kenzo Tenma, a prized Japanese surgeon in a German hospital. When he makes the choice of operating on a young boy over the city mayor, believing that it was the right thing to do, his life begins spiraling down into despair. Things get worse when the young boy grows up to be a dangerous serial killer, and Tenma feels responsible for putting a stop to him.

To the uninitiated, Code Geass might appear to be an action-driven mecha anime, but it offers far more to the viewers with its mind-blowing mind games. The series revolves around Lelouch, the exiled prince of Britannia who was sent to Japan as a mere political pawn. With a thirst for revenge on his father and his own country, Lelouch then uses his genius and his Geass, which grants him the power to manipulate people, to take down Brittania and its king.

If Death Note has a murderous notebook and Code Geass has the manipulating power of the Geass, Steins; Gate uses time travel to propel its thrilling tale. It centers on Okabe, a self-proclaimed mad scientist, who invents a device that could send emails to the past, making changes to it. But when the research organization SERN sends its men to retrieve it, his friend Mayuri gets killed. To save Mayuri from her fate, Okabe must undo the changes they’ve made in time, but not without consequences.

This anime also incorporates time travel into a mystery thriller. Erased follows the aspiring manga artist and pizza delivery guy Satoru who has the power to go back in time a few minutes earlier when someone around him is about to die. But when his mother gets murdered, Satoru is suddenly sent back to 20 years ago, giving him another chance, as his 9-year-old self, to save a childhood friend from being killed by a serial killer.

Future Diary is one of the most popular anime out there under the survival game subgenre. And while it has plenty of action, it also offers some huge psychological thrills and shockers. The series begins with the god of space and time, Deus Ex Machina, orchestrating a game of kill-or-be-killed between twelve individuals, who he’d given the power to predict the future through their diaries. Yuki is one of the competitors, and while he seemed to be an easy target, another player appears to protect him no matter the cost. But could he trust her with his life?

If you’re a fan of crime thrillers, then this sci-fi anime is worth checking out. In the futuristic city of Cremona, a mysterious figure known as Killer B throws the city into chaos by enacting vigilante justice in its streets. To catch the dangerous murderer, the Royal Investigation Service (RIS) calls in the seasoned investigator Keith Flick to get on the case, but as Keith delves deeper into the mystery, plots of corruption, human experiments, and domestic terrorism begin to unravel before him.

The Promised Neverland‘s second season received mixed reactions after taking a different route from the manga, but for those who don’t have the time to read its 20 volumes, the anime is still worth watching. Unlike the other titles on this list, The Promised Neverland‘s main protagonists are just children, but it does not take long for the anime to take a dark turn. The series revolves around the children of the orphanage Grace Field House, who lives a seemingly perfect life with the caretaker they call Mama. But the lives of the house’s most intelligent kids, Emma, Norman, and Ray, are upended when they discover that they are being raised as livestock for flesh-eating monsters. The three must then plan an escape and save the other children from their cunning Mama.

This film from 1997 is regarded as one of the classics that needs to be seen by fans of psychological thrillers. In Perfect Blue, the J-Pop idol Mima Kirigoe decides to leave her group to pursue a career in acting. But as the work becomes more demanding and the group she left getting more success without her, Mima’s life seems to be going downhill. On top of it all, an obsessed fan starts stalking her, slowly driving her into insanity as the reality and fantasy converge before her very eyes.

Also from the director of Perfect Blue, Satoshi Kon, comes this thrilling anime series about a bizarre figure called the Lil’ Slugger. The story begins with Tsukiko Sagi, a character designer who created the popular pink dog Maromi but is pressured to recreate her success. One night, she is attacked by an elementary school boy with a bent golden baseball bat. When another victim surfaces, detectives Ikari and Maniwa set out on a mission to track down and stop the perpetrator, as the paranoia among civilians rises.

Terror in Resonance is another anime that depicts the spread of terror among people. It begins with a terrorist attack on a nuclear facility in Japan, causing great chaos among the citizens and the authorities who are supposed to track down the culprits. Six months later, a video surfaced on the internet with two teenagers who identify themselves as ‘Sphinx’, threatening to cause further destruction across Tokyo. With the mass panic and the dangerous terrorists on the loose, Detective Kenjirou Shibazaki finds himself desperate to find answers.

One of the questions that many of us will carry throughout our lifetime is what will happen when we die? Death Parade offers a unique take on an answer. In the anime series, there is no Heaven or Hell. When people die, they are sent to the Quindecim, a mysterious bar run by the white-haired Decim. To judge the dead whether they should be reincarnated or sent to the Void, Decim plays games with them that would bare their nature.

Psycho-Pass is a cyberpunk thriller that explores psychological themes in a dystopian setting. In this series, advanced technology has become able to calculate a person’s criminality potential through mind scans, which is used to enforce the law and apprehend possible perpetrators. Akane Tsunemori, joins the law enforcement to uphold justice, but as she discovers more about the present system, she begins to question if they really have a flawless method in keeping the peace in the community.

Fans of Sir Arthur Conan Doyle’s Sherlock Holmes will surely be interested in this anime that carries a familiar name. Moriarty is best known as Holmes’ archenemy, with intellect on par with the iconic detective. But in this series, William James Moriarty is not just a genius criminal mastermind. The series gives him empathic motives, making him a hero of sorts determined to rid his country of its most rotten people.

Alice in Borderland gained immense popularity thanks to its live-action adaptation on Netflix. But years before, the original manga has been adapted into a three-episode original video animation (OVA), which is more loyal to the original story. Alice in Borderland centers on Arisu and his friends Chota and Karube, who are suddenly thrust into the world of Borderland. Here, they have to play death games to survive. As they are faced with deadlier challenges, their instincts for survival become more apparent toying with their feelings and principles.

Which of these titles would you watch first? Give it a review and rating on my.clickthecity.com! Stay in the loop and connect with us on Facebook, Instagram, and Twitter.