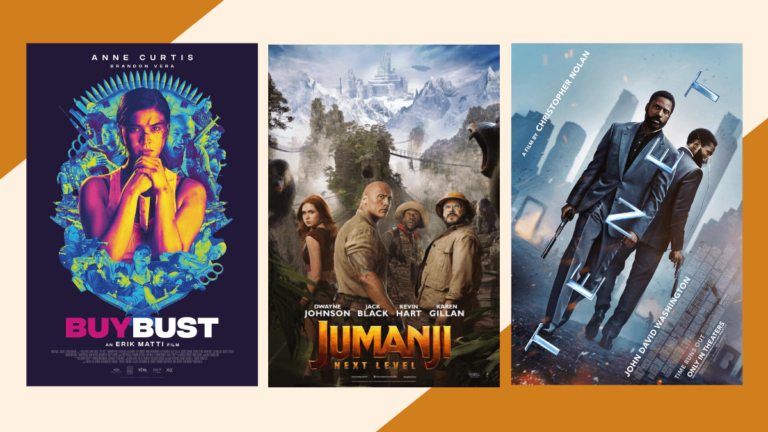 Isn’t it a bummer when you see your favorite movie already playing halfway through when you turn on the TV? Fret not! From rom-com and action to horror and thriller, we’re giving you a heads up on all the must-watch movies on TV from December 6 to 12, 2021.

BuyBust
(1:30pm, PBO)
After surviving the slaughter of her entire squad in a drug raid compromised by dirty cops, anti-narcotics special operative Nina Manigan is eager to go head-to-head with the drug cartels that hold a bloody grip on Manila. But when her new mission in the city’s most dangerous slum goes south, the angry civilians turn on her squad. Trapped between a brutal drug gang and hordes of bloodthirsty citizens, their only option is to fight their way out.

Gone Girl
(2:45pm, HBO)
In Carthage, Mo., former New York-based writer Nick Dunne and his glamorous wife Amy present a portrait of a blissful marriage to the public. However, when Amy goes missing on the couple’s fifth wedding anniversary, Nick becomes the prime suspect in her disappearance. The resulting police pressure and media frenzy cause the Dunnes’ image of a happy union to crumble, leading to tantalizing questions about who Nick and Amy truly are.

Always Be My Maybe
(5pm, Cinema One)
After being dumped by their respective lovers, Jake and Tintin cross paths at a resort and discover they have much in common.

Spider-Man: Homecoming
(7:50pm, HBO)
Thrilled by his experience with the Avengers, young Peter Parker returns home to live with his Aunt May. Under the watchful eye of mentor Tony Stark, Parker starts to embrace his newfound identity as Spider-Man. Peter must soon put his powers to the test when the evil Vulture emerges to threaten everything that he holds dear.

BFF: Best Friends Forever
(9pm, Cinema One)
Two women who are polar opposites form a close friendship, but their friendship is tested when they realize that they’re in love with the same man.

21 Bridges
(11:35pm, Cinemax)
After uncovering a massive conspiracy, an embattled NYPD detective joins a citywide manhunt for two young cop killers. As the night unfolds, he soon becomes unsure of who to pursue — and who’s in pursuit of him. When the search intensifies, authorities decide to take extreme measures by closing all of Manhattan’s 21 bridges to prevent the suspects from escaping.

Monte Carlo
(3:25pm, HBO)
Best friends Grace and Emma quit their waitress jobs in small-town Texas and head to Paris for a summer adventure, accompanied by Grace’s stepsister, Meg. The prepackaged tour fails to meet their expectations, however, and soon their spirits sag. But, when Grace is mistaken for a British socialite named Cordelia, she and her companions head to Monte Carlo to enjoy a week of yacht parties and cute bachelors — then the real Cordelia arrives.

Bridesmaids
(7pm, HBO)
Annie is a single woman whose own life is a mess, but when she learns that her lifelong best friend, Lillian, is engaged, she has no choice but to serve as the maid of honor. Though lovelorn and almost penniless, Annie, nevertheless, winds her way through the strange and expensive rituals associated with her job as the bride’s go-to gal.

World War Z
(9pm, HBO)
When former U.N. investigator Gerry Lane and his family get stuck in urban gridlock, he senses that it’s no ordinary traffic jam. His suspicions are confirmed when, suddenly, the city erupts into chaos. A lethal virus, spread through a single bite, is turning healthy people into something vicious, unthinking and feral. As the pandemic threatens to consume humanity, Gerry leads a worldwide search to find the source of the infection and, with luck, a way to halt its spread.

Must Be Love
(5pm, Cinema One)
A young woman develops romantic feelings for her best friend, but problems arise when another gal enters the picture.

Tenet
(9pm, HBO)
A secret agent is given a single word as his weapon and sent to prevent the onset of World War III. He must travel through time and bend the laws of nature in order to be successful in his mission.

You Changed My Life
(9:30pm, PBO)
Miggy and Laida settle into their lives as a couple, but their successful careers soon threaten to tear them apart.

Coach Carter
(5:55pm, Cinemax)
In 1999, Ken Carter returns to his old high school in Richmond, California, to get the basketball team into shape. With tough rules and academic discipline, he succeeds in setting the players on a winning streak. But when their grades start to suffer, Carter locks them out of the gym and shuts down their championship season. When he is criticized by the players and their parents, he sticks to his guns, determined that they excel in class as well as on the court.

Jumanji: The Next Level
(7pm, HBO)
Four high school kids discover an old video game console and are drawn into the game’s jungle setting, literally becoming the adult avatars they chose. What they discover is that you don’t just play Jumanji – you must survive it. To beat the game and return to the real world, they’ll have to go on the most dangerous adventure of their lives, discover what Alan Parrish left 20 years ago, and change the way they think about themselves – or they’ll be stuck in the game forever.

The Mall, The Merrier
(9pm, Cinema One)
Two siblings fight for ownership of their parents’ mall.

Godzilla
(12:35pm, HBO)
Ford Brody, a Navy bomb expert, has just reunited with his family in San Francisco when he is forced to go to Japan to help his estranged father, Joe. Soon, both men are swept up in an escalating crisis when Godzilla, King of the Monsters, arises from the sea to combat malevolent adversaries that threaten the survival of humanity. The creatures leave colossal destruction in their wake, as they make their way toward their final battleground: San Francisco.

Batman Begins
(7:40pm, Cinemax)
A young Bruce Wayne travels to the Far East, where he’s trained in the martial arts by Henri Ducard, a member of the mysterious League of Shadows. When Ducard reveals the League’s true purpose — the complete destruction of Gotham City — Wayne returns to Gotham intent on cleaning up the city without resorting to murder. With the help of Alfred, his loyal butler, and Lucius Fox, a tech expert at Wayne Enterprises, Batman is born.

The Dark Knight
(10pm, Cinemax)
With the help of allies Lt. Jim Gordon and DA Harvey Dent, Batman has been able to keep a tight lid on crime in Gotham City. But when a vile young criminal calling himself the Joker suddenly throws the town into chaos, the caped Crusader begins to tread a fine line between heroism and vigilantism.