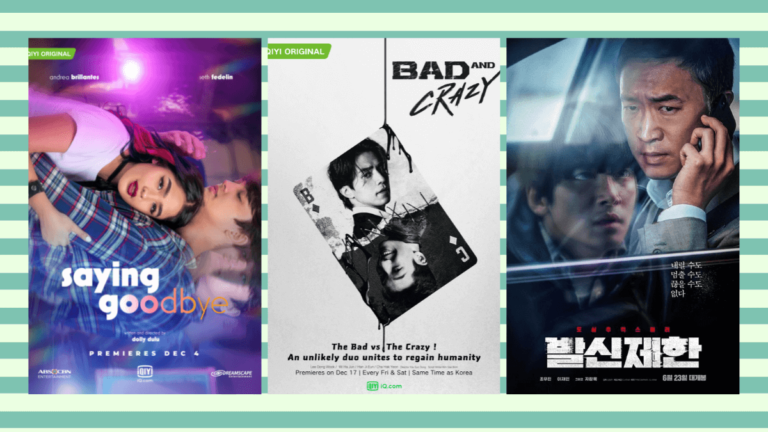 Love to watch C-dramas, K-dramas, and anime? Then one of the best streaming sites to subscribe to right now is iQiyi, which has a wide variety of titles and is still set to release an amazing slate of titles in the coming months. Below, we’re listing down some of the highly-anticipated Asian titles that are coming to iQiyi for the month of December.

Stories from the Heart: Love on Air
December 2

In Stories from the Heart: Love on Air, a station manager decides to help DJ Jojo’s love advice program by hiring a woman nicknamed Miss Wonderful, a constant caller who constantly bickers with DJ Jojo on his views on love. What makes the deal more complicated is the fact that they need to pretend to be lovers to boost the show’s ratings. Khalil Ramos and Gabbi Garcia star in this series.

Saying Goodbye is a young-adult series about the journey of Elise and Ricky, whose first meeting is all about fighting on who gets the last piece of their favorite idol’s album. Their fight turns into an enduring friendship, strengthened by their love for life and adventure. Andrea Brillantes, Seth Fedelin, Andi Abaya, and Kobe Brown star in this series.

In Hello, Heart, Gigi De Lana plays Heart, a beautiful, hardworking, but very unlucky woman. She meets her lucky charm in Gerald Anderson’s Saul, an emotionless man who hires her to pretend to be his wife to please his grandmother with dementia.

Bad and Crazy is a K-drama about Ryu Su Yeol, a corrupt cop who is only after promotions and material things. Things take a turn when a hidden persona called “K” awakens in him, and he starts fighting for justice and against police corruption. This drama stars Lee Dong Wook, Wi Ha Joon, Han Ji Eun, and N.

Luoyang is a Chinese historical drama set in the ancient capital Luoyang during the Zhou Dynasty. It’s about three people who all work together to investigate a series of mysterious incidents that involve a plan to overthrow Empress Wu Ze Tian. Wang Yibo, Victoria Song, Huang Xuan, and more star in this drama.

The Flowers are Blooming
December 15

The Flowers are Blooming centers on Princess Chen Lang Yue, who was favored by the former emperor and was allowed to grow up free and unrestrained. Proficient in everything, from poetry to music, she is filled with a thirst for more knowledge, leading her to sneak out of the palace to join a team of craftsmen. The drama stars Kiki Xu and Hung Sheng Chi.

Gen Y The Series is a Thai series will be addressing the disappointment of the characters in Season 1, while the complicated relationship of the leading couple will continue to develop as they all learn how to love. It stars Dun-Dun Romchumpa, Bas-Suradet Piniwat, Kimmon-Warodom Khemmonta, and Copter-Panuwat Kerdthongtavee.

Blue Exorcist is an anime series centering on Rin Okumura, a teenager who discovers that he and his twin brother Yukio are actually sons of Satan and that he is the inheritor of Satan’s powers. When his guardian is killed by Satan, he enrolls at the True Cross Academy, where he trains to become an exorcist to defeat his father.

Hard Hit is a Korean movie that centers on Lee Sung Kyu, a manager at a bank branch who’s driving his kids to school before going to work when he receives a phone call, saying that a bomb will explode once he gets out of the car. It stars Ji Chang Wook, Jo Woo Jin, Lee Jae In, and more.

The Mystic Nine: The Last Begonia

The Mystic Nine: the Last Begonia is a Chinese movie adapted from a web novel. It is about Zhang Qishan, a young man who comes to Changsha, where he meets Er Yuehong, a young master armed with special skills. The two end up working together to punish criminals and punish evil. Starring in this drama are Dong Haoran and Zhu Zanji.

Stories from the Heart: Love on Air