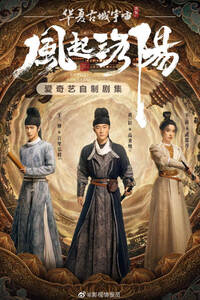 Drama, Mystery
Be the first to rate this

Chinese drama "Luoyang" (2021) is adapted from Ma Boyong's novel with the same name, which tells a series of stories that happened during the Wu Zhou period where a group of people from different classes investigated the unsettled case in Luoyang. Gao Bingzhu (played by Huang Xuan), a vice Sleuth-hound captain bottom of Luoyang, was involved in a case by mistake and became a suspect. When he tried to prove his innocence, he met Baili Hongyi (played by Wang Yibo) who found out the truth about his father being poisoned. The two cooperate and investigate. Si Yue (played by Song Qian), who is from a prestigious family, investigates and approaches Gao Bingzhu, who is excellent in martial arts and has wisdom to find information related to the case. These two people of completely different classes are not pleasing to each other's eyes. But they had to be tied together. As they continued to dig into the case and search for the truth, they discovered a shocking conspiracy capable of destroying the God city and staining Luoshui with blood. Chinese drama "Luo Yang" starring Huang Xuan ("Minning Town", "Red Sorghum"), Wang Yibo ("The Untamed", "Legend of Fei") and Song Qian ("Find Yourself"), will be broadcasted online on iq.com.