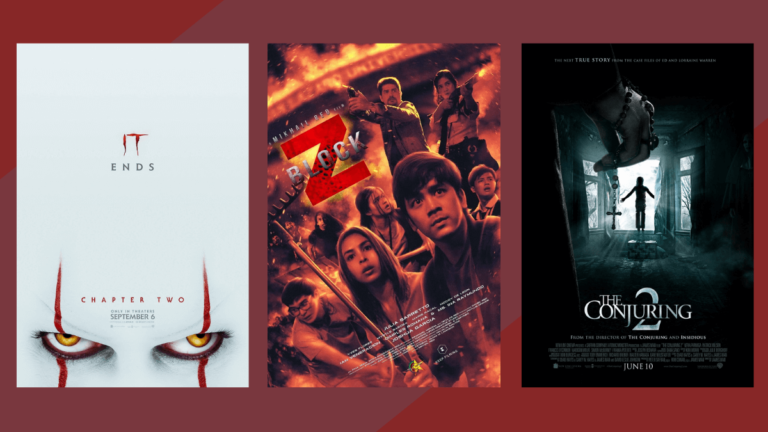 Isn’t it a bummer when you see your favorite movie already playing halfway through when you turn on the TV? Fret not! From rom-com and action to horror and thriller, we’re giving you a heads up on all the must-watch movies on TV from October 25 to 31, 2021.

Marley & Me
(3:35pm, HBO)
A happily married couple’s life changes after they adopt a free-spirited pup named Marley who, along with his antics, manages to teach them and their children important life lessons.

Love You To The Stars and Back
(7pm, Cinema One)
Feeling out of place in her own home, an eccentric and socially awkward girl, Mika, decides to go on a road trip with a very strange goal, to look for aliens. On her trip, Mika accidentally bumps into a simple and good-humored boy, Caloy, whom she chooses to give a free ride to until he reaches his destination.

My Bakit List
(7:30pm, PBO)
Bombarded with so many why’s in her life, Dess embarks on a soul-searching journey. Unknown to her, she is about to face the biggest why of her life when she accidentally bumps into Ejay, her ex-boyfriend who left her without any explanation.

Letters To Juliet
(5pm, HBO)
Sophie, an aspiring writer assisted by the secretaries of Juliet, sets out to unite Claire with her lover. While on her journey, she finds herself drawn to Claire’s grandson.

Diary Ng Panget
(7:30pm, PBO)
A poor young woman becomes a personal maid for a rich and handsome young man. The two do not get along at first, but as their lives become entangled, their relationship becomes more complicated.

Drag Me To Hell
(10pm, Cinemax)
When loan officer Christine Brown refuses an old lady an extension on her loan, the lady places a curse of the Lamia upon Christine. Once cursed, Christine’s life is turned into a living nightmare.

The Mall, The Merrier
(3:15pm, PBO)
Two siblings fight for ownership of their parents’ mall.

The Spongebob Squarepants Movie
(3:30pm, HBO)
Trouble starts brewing in Bikini Bottom when someone steals King Neptune’s crown and the blame falls on Mr. Krabs. Despite this, SpongeBob stands by his employer and sets out to find the treasure.

A Dog Year
(6:45pm, Cinemax)
A Dog Year shows how a man discovered much about himself through one dog (and then another), whose temperament seemed as different from his own as day from night.

Unexpectedly Yours
(7pm, Cinema One)
On the eve of her 50th birthday, Patty finds her drunk and desperate self in the arms of Cocoy. As it turns out, Cocoy is not only her neighbor but her old high school schoolmate who’s always been secretly in love.

The Conjuring
(9:55pm, HBO)
The Perron family moves into a farmhouse where they experience paranormal phenomena. They consult demonologists, Ed and Lorraine Warren, to help them get rid of the evil entity haunting them.

The Conjuring 2
(11:45pm, HBO)
Peggy, a single mother of four children, seeks the help of occult investigators Ed and Lorraine Warren when she and her children witness strange, paranormal events in their house.

Coach Carter
(6:05pm, Cinemax)
A sports goods store owner accepts the job of basketball coach for his old high school where he was a champion athlete. Dismayed by the attitudes of his players, he sets out to change things.

It: Chapter 2
(10pm, HBO)
After 27 years, the Losers Club receives a call from their friend Mike Hanlon that Pennywise is back. They decide to honor their promise and return to their old town to end the evil clown for good.

Feng Shui 2
(7pm, Cinema One)
Lester Anonuevo struggles to make ends meet for his family. Having difficulties in earning a decent living, he accepts an offer from a mysterious Chinese woman to recover a specific bagua for a handsome fee.

Sonic The Hedgehog
(7:25pm, HBO)
An extraterrestrial hedgehog is discovered by a scientist with evil intentions and plans to use his superpowers for his selfish needs.

Men In Black: International
(3:55pm, Cinemax)
Agent M, a probationary member of the MIB, teams up with Agent H and uncovers a sinister plot that reveals a traitor in the organization aiding an alien invasion.

Kimmy Dora and the Temple of Kyeme
(7pm, Cinema One)
The adult twin daughters of an aging business mogul find themselves haunted by a terrifying ghost. The two dig into their family’s past, and they travel to South Korea to try and find a way to appease the angry spirit.

Blumhouse’s Fantasy Island
(9:55pm, HBO)
The enigmatic Mr. Roarke makes the secret dreams of his lucky guests come true at a luxurious but remote tropical resort, but when the fantasies turn into nightmares, the guests have to solve the island’s mystery in order to escape with their lives.