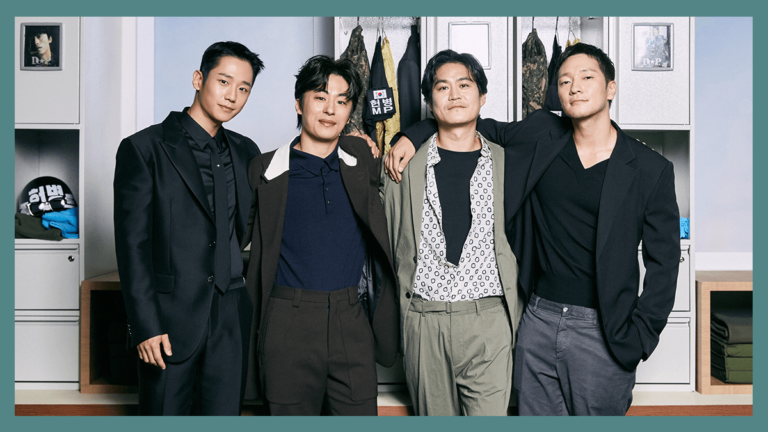 Salute! Jung Hae In’s newest K-drama D.P. is streaming today on Netflix! The 6-episode original series tells the story of the people in the military’s Deserter Pursuit unit, whose job involves going after the soldiers who have deserted their posts and have gone AWOL. Joining Jung Hae In in this drama are Koo Kyo Hwan, Kim Sung Kyun, Son Suk Ku, and more.

At the center of the story is Ahn Jun Ho, a young private who is assigned to work in the military’s D.P. unit alongside Han Ho Yeol. As he works in this post, tracking down soldiers, he encounters the realities of these young men and learns the troubles that they have been facing.

The drama comes from Han Jun Hee (Coin Locker Girl), who directed and wrote the screenplay for the drama alongside webtoon artist Kim Bo Tong.

Just in time for the drama’s premiere, we got the chance to join a virtual press conference with the cast and director of D.P., as well as a quick chat with lead stars Jung Hae In, Koo Kyo Hwan, and Kim Sung Kyun.

Here’s what we got to know — and you definitely should, too — about this new title:

1. D.P. is based on a popular webtoon by Kim Bo Tong

D.P. is a drama that’s been adapted from the hit webtoon entitled D.P. Dog Day by Kim Bo Tong. According to director Han Jun Hee, he’s been wanting to bring the webtoon to screen for about 5 to 6 years now. “What was most important for me was what kind of stories could be portrayed through this series,” he explained. “Young men in their early 20s all go serve in the military and I think people can really resonate with the story and put themselves in the shoes of the characters.”

You can read the original (and untranslated) webtoon on Lezhin Korea.

Fun Fact: Webtoon artist Kim Bo Tong was actually part of the D.P. when he did his service, so you can expect the webtoon to be as realistic as it can be!

2. D.P. is an actual unit in the military

If you’ve been wondering, there really is a Deserter Pursuit unit! D.P. is under the military police and has soldiers who don’t look like soldiers at first glance. “[They’re] outside the military base and in the civilian world, searching for army deserters,” Jung Hae In explained. “They sometimes grow their hair long, they dye their hair, wear sunglasses, and they’re definitely undercover. They might be too obvious if they were dressed like soldiers.”

As to whether they were familiar with the D.P. unit before getting involved in the drama, Jung Hae In, Koo Kyo Hwan, and Kim Sung Kyun all said that while they were aware of the existence of the unit, it was only in the webtoon and the drama that they got to know more about it.

Kim Sung Kyun, who plays Park Beom Gu, said: “I knew that there [was a] military police who went after soldiers who broke guidelines or laws of the military, but the series was the first opportunity for me to learn about the D.P. unit.”

3. Lim Ji Seop and Han Ho Yeol are new additions to the story

Corporal Han Ho Yeol and Captain Lim Ji Seop are two new characters that have been added to the drama as a way to tell more stories on what happens in the military base. Koo Kyo Hwan plays Han Ho Yeol — Jun Ho’s senior and partner in the unit. According to the actor, he’s “like a duo” with his junior, and they work together to go after AWOL soldiers.

Meanwhile, Son Suk Ku plays Captain Im Ji Seop, a character who is always at Sergeant Park Beom Gu’s throat. He said that Im Ji Seop will remind viewers of people’s “desire for promotions while they’re working in the society.”

Aside from introducing new characters, another big change that the drama made from the webtoon is Jun Ho’s rank. While he was a corporal in the webtoon, Director Han decided to make him a private in the drama as he “wanted [the audience] to consider Jun Ho as a friend who just started his military service.” He also explained that the change in rank is so that people can resonate more with the story.

Jung Hae In said that fans of the webtoon can see this drama as a prequel to the original material since he has less power in the drama and shows his beginnings in the unit.

4. This is the first time the actors got to work with each other for the drama

All the actors have nothing but praise for each other when asked about what it’s like to work with each other for the first time. However, the relationship we get to see the most in D.P.‘s 6 episodes is that of Jun Ho and Ho Yul, who make a great team despite having different personalities.

When we asked Koo Kyo Hwan about what made his and Jung Hae In’s chemistry work and what it was like to work with Kim Sung Kyun, he said: “I think opposites attract, and opposites actually complement each other. I think that was actually better for us to be kind of opposite characters. With Sung Kyun, I respect him very much as an actor, so it was an honor for me [to work with him].”

A word that the cast members emphasized in the press conference is “camaraderie” and how they formed this with their fellow castmates, as well as with the production crew. Song Suk Ku said that because the set “felt like a real military base,” he — as any soldier would — had built up a brotherhood with everyone else.

Meanwhile, Jung Hae In added that his castmates were like big brothers to him. “Even after we were done filming the series, I wanted to see them again and meet them again,” he said. “I felt like I was at home and comfortable every time I saw them”

5. Every episode of D.P. tells the story of a different soldier

Each episode of D.P. features Jun Ho and Ho Yeol as they go on a mission to find and bring a deserter back to the base. And as they go on their quest, they also end up learning about these soldiers’ stories and their reasons on why they decided to escape.

Asked about which particular story resonated with him the most, Jung Hae In told us about the episode about a soldier named Heo Chi Do. “I lived together with my grandma and grandpa when I was small, so I was reminded of my grandma a lot while I was shooting the episode. I have a very similar experience, so I could really resonate with [Heo Chi Do],” he said.

Meanwhile, for Kim Sung Kyun, his favorite story from the drama isn’t one that involves a deserter. Instead, he mentioned the episode where the D.P. duo goes on leave — something that soldiers look forward to when doing their service. “I remember the episode when I let Jun Ho and Ho Yeol go on leave. To soldiers, going on leave is such a big event. It’s something that’s so exciting. We eagerly wait for it, so even if I wasn’t the one going on leave, it was a big joy for me,” he explained.

6. Jung Hae In had to do boxing training for three months to prepare for his role

Viewers of the drama can already expect D.P. to be thrilling and action-packed, with Jun Ho and Ho Yeol going out to find those who’ve left their posts. And to prepare for that role, Jung Hae In, whose character is someone who’s good at boxing, had to train for these for three months before filming began to make his fight scenes as seamless as possible.

Hae In said, “Director Han and the martial arts director wanted to make sure there were no cuts during the action scenes, and they wanted to film many one-take shots. Actor Lee Jun Young is also in the series and we trained really hard for three months.”

7. The set was so realistic that the cast felt like they were reliving their experience

The cast has also mentioned in the press conference that the set for the military base was so realistic that they felt like they were brought back to the days when they served. In fact, Jung Hae In even admitted to saying his real name instead of Jun Ho’s during the early days of filming. “I was so nervous and there were officers there, so while filming, I actually addressed myself as Private Jung Hae In,” he said.

Hae In also elaborated more on how realistic everything is during our interview with them. “The drama is very realistic so I could think of the time when I first enlisted in the army and how I was trained in the boot camp. It was so realistic that I sometimes forgot that this was a shoot. I felt like I was actually in the military boot camp. I think my experience serving in the army really helped me [with that].”

8. The drama shines a light on the experiences of Korean men

There aren’t many K-dramas out there that discuss the mandatory military enlistment of Korean men and so a lot of people are probably wondering just what happens in these base camps and what kind of training these men go through. With D.P., Director Han hopes that he can bring the soldiers’ stories to light and that it will resonate with the viewers. “The original intention of the webtoon, as well as the series, is talking about how certain things take place in places where people are not always watching,” he said.

As to why D.P. is a story worth telling especially today, Kim Sung Kyun said: “Even to this day, there are still men enlisting and joining the army. I think the military is kind of like a small society. We’re not trying to criticize the small society. We’re just showing a light on these young lads who just started their first steps in it.”

All 6 episodes of D.P. are streaming on Netflix today.

ALSO READ
WATCH: Jung Hae In in the Teaser of the Netflix K-Drama ‘D.P.’ 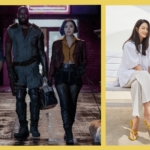 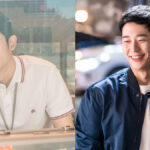 Which of Jung Hae-in’s characters do you love the most? Don’t miss out on seeing him in D.P. when it premieres on August 27, only on Netflix! 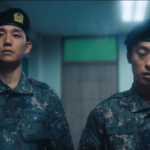 WATCH: Jung Hae In and Koo Kyo Hwan Team Up in the New Trailer of 'D.P.'

WATCH: Jung Hae In in the Teaser of the Netflix K-Drama 'D.P.'

The drama premieres on Netflix this August 27!