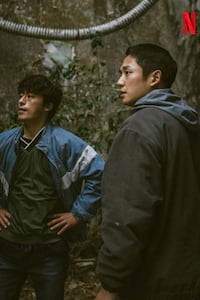 D.P., which stands for Deserter Pursuit, tells the story of a team of soldiers whose mission is to catch deserters.

[About:]
D.P. is an upcoming South Korean television series starring Jung Hae-in, Koo Kyo-hwan, Kim Sung-kyun and Son Seok-koo. Based on the webtoon D.P: Dog Days by Kim Bo-tong, the series is co-written by Kim and Han Jun-hee. The latter also serves as the director. D.P. is scheduled to be released on Netflix in 2021.