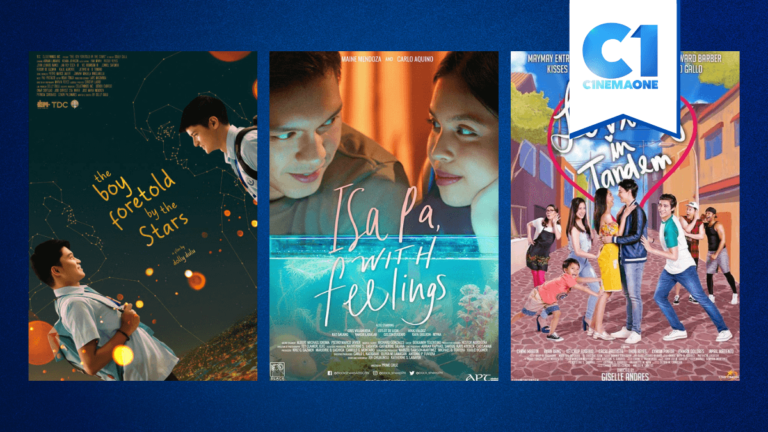 10 Movies Coming to Cinema One This August 2021

Plan your TV marathon in advance, as we round up 10 Cinema One movies for the month of August!

Rainy days keeping you at home? Stay in and enjoy movie nights with the family this August as Cinema One rounds up blockbuster films starring Kim Chiu, Aga Muhlach, Carlo Aquino, and more!

Plan your TV marathon in advance, as we round up Cinema One movies this August 2021:

1. The Boy Foretold by The Stars

Dominic believes that his soulmate is soon to come to his life after a fortune-teller gave him a reading. He then falls for Luke, a brokenhearted classmate he got close with during their retreat. But will their relationship turn into something more than just friends?

ALSO READ:
Movie Review: The Inescapable Charm of ‘The Boy Foretold by the Stars’

Shine is a hopeless romantic wishing to meet the love of her life. As if her prayers have been answered, she meets Luke who will brighten up her days.

This unique found footage romance tells about two boys who navigate an uncertain unlabeled relationship before the pandemic, but ironically find clarity and intimacy in their love during the lockdown.

A young girl unlucky in love takes advice to transform herself into someone more likely to end up in a relationship.

A man marries his first love, despite opposition from friends and family. Married life turns out to be much tougher than he could have ever imagined.

A flamboyant teenager finds himself in a love triangle while trying to fulfill his dream of becoming a dancer.

A jaded dancer is hired to be the dance instructor for a ball hosted by a powerful political family. There, he’s immediately drawn to a sad young woman engaged to be married to one of the family’s scions. With powerful forces arrayed against them, the two risk everything for their love.

The Bonifacio siblings reunite when they find out their father is diagnosed with cancer. In the process, they have to deal with unresolved issues among themselves before it’s too late.

A deaf man befriends his neighbor, a young aspiring architect, and teachers her basic sign language.

ALSO READ:
‘Isa Pa, With Feelings’ and The Importance of a Strong Finish

For more Cinema One movies this August and for daily schedules of Cinema One, click here.

Boyette: Not a Girl Yet