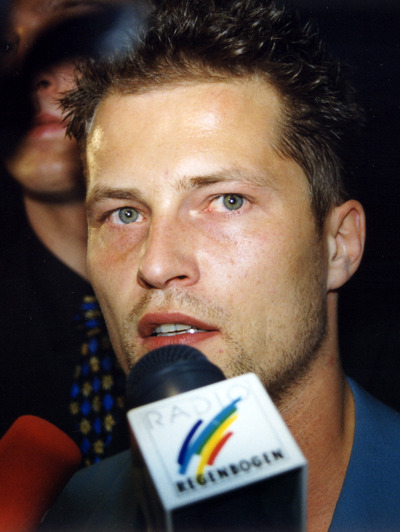 Tilman Valentin "Til" Schweiger (born 19 December 1963) is a German actor, director, and producer. He is one of Germany's most successful filmmakers. Since 1968, when the FFA started counting, no other German actor has drawn more people to the cinemas. He runs his own production company, Barefoot Films, in Berlin.

Schweiger was born in Freiburg, West Germany to two teachers. He grew up in Heuchelheim near Giessen in Hesse, where he went to school. Later he attended acting lessons at Der Keller in Cologne and graduated in 1989.

Schweiger's debut as a producer and (uncredited) director came in 1997 with Knockin' on Heaven's Door. The film remains a cult favourite for audiences worldwide. He also directed and produced Der Eisbär (The Polar Bear) in 1998. Schweiger won a prestigious Bambi Award for Barfuß (Barefoot) in 2005, which he wrote, directed, and starred in. He also won a Bambi for his lead role in Traumschiff Surprise – Periode 1. In 2007, Keinohrhasen (this literally translates to "no ear rabbit" while the English title is Rabbit Without Ears), written, produced, and directed by Schweiger, became the most successful film in German theaters with a box office result of USD 62,000,000. The film won a Bambi, a Bavarian Film Award, the German Comedy Award, two DIVA Awards, a Jupiter Award and the Ernst Lubitsch Award. The sequel, Zweiohrküken (Rabbit Without Ears 2, literally "two ear chicks"), was released the following year and was also a huge success with over 4.2 million viewers and a box office of USD 45,000,000. Schweiger then went on to direct, produce and star in 1½ Knights – In Search of the Ravishing Princess Herzelinde, which also proved a huge cinema hit on its release in 2008. The movie Kokowääh debuted in German cinemas in February 2011. Schweiger's daughter Emma stars beside him, and the movie is also directed, co-written and produced by him. Schweiger will reprise his role as Henry in its upcoming sequel, Kokowääh 2, co-starring his daughter Emma Schweiger. The film will be released on February 7, 2013.

Schweiger has also appeared in a wide range of American films, including Already Dead, King Arthur,In Enemy Hands, Magicians, Tomb Raider: The Cradle of Life, Driven, SLC Punk!, Investigating Sex, Joe and Max, and The Replacement Killers. His latest big screen appearance was as Hugo Stiglitz in Quentin Tarantino's Inglourious Basterds. Schweiger appeared in the US productions The Courier with Mickey Rourke and This Means War (2012), with Chris Pine and Reese Witherspoon.

Schweiger has been in a relationship with model Svenja Holtmann since 2010.