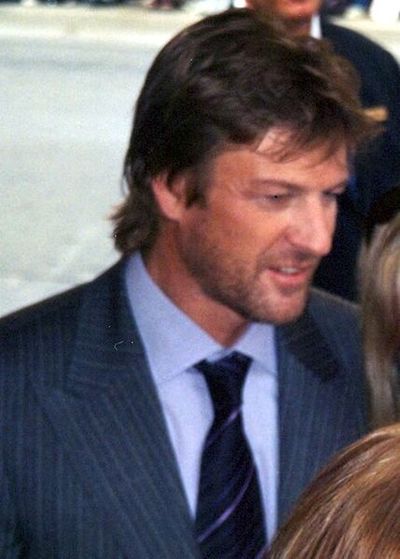 Shaun Mark "Sean" Bean (born 17 April 1959) is an English film, television, theatre and voice actor. He graduated from the Royal Academy of Dramatic Art in 1983 and was a member of the Royal Shakespeare Company.

Bean first found success for his portrayal of Richard Sharpe in the ITV television series Sharpe. He has since garnered further recognition for his performances in the HBO epic fantasy series Game of Thrones, the BBC anthology series Accused and the ITV historical drama Henry VIII. His most prominent film role was in Peter Jackson's The Lord of the Rings trilogy as Boromir (2001-2003). Other notable roles include Alec Trevelyan in the James Bond film Golden Eye (1995) and Odysseus in Troy (2004) as well as Patriot Games (1992), Ronin (1998), National Treasure (2004), North Country (2005), The Island (2005), Silent Hill (2006) and Black Death (2010). He will also co-star in the upcoming science fiction film Jupiter Ascending. As a voice artist he has featured in the video game The Elder Scrolls IV: Oblivion and the drama The Canterbury Tales among several others.

Bean has received several honours throughout his career and has won an International Emmy for Best Actor. He has also been nominated for a BAFTA and Saturn Award.

Bean was born Shaun Mark Bean in the Handsworth district of Sheffield, West Riding of Yorkshire, England, the son of Rita (née Tuckwood) and Brian Bean. Bean's father owned a fabrication shop, which he had set up with a colleague. The business employed 50 people, including Bean's mother, who worked as a secretary. He has a younger sister named Lorraine. Despite becoming relatively wealthy (his father owned a Rolls-Royce Silver Shadow), the family never moved away from the council estate as they preferred to remain close to friends and family.

As a child, Bean smashed a glass door because of an argument over scissors. It left a piece of glass embedded in his leg that briefly impeded his walking and left a large scar. This accident prevented him from pursuing his dream of playing football professionally. Bean left Brook Comprehensive School with two O Levels in Art and English in 1975. After a job at a supermarket and another for the council, Bean started working for his father's firm with a day release at Rotherham College of Arts and Technology to take a welding course. While there he stumbled into an arts class and decided to pursue his interest in art.

After attending courses at two other colleges, one for half a day and the other for less than a week, he returned to Rotherham College, where he came across a drama course for which he subsequently enrolled. After some college plays and one at Rotherham Civic Theatre, he applied for and received a scholarship to the Royal Academy of Dramatic Art (RADA), starting a seven term course in January 1981.

Bean graduated from RADA in 1983, making his professional acting debut later that year as Tybalt in Romeo and Juliet at the Watermill Theatre in Newbury. His early work involved a mixture of stage and screen work. As an actor, he adopted the Irish spelling "Sean" of his first name. His first national exposure came in an advert for non-alcoholic lager. Between 1986 and 1988 he was a member of the Royal Shakespeare Company; appearing in productions of Romeo and Juliet, The Fair Maid of the West, and A Midsummer Night's Dream. He appeared in his first film in 1986 playing Ranuccio Tomassoni in Derek Jarman's film Caravaggio, followed in 1988 by War Requiem which was also directed by Jarman and starred Laurence Olivier. In 1989 he starred as the evil Dominic O'Brien in Catherine Cookson's The Fifteen Streets, where he gained a dedicated following. During the late 1980s and early 1990s, Bean became an established actor on British television. He had notable performances in the BBC productions Clarissa and Lady Chatterley, and his role in the latter became noted for his sex scenes with Joely Richardson.

Bean has been married and divorced four times. He married his secondary school sweetheart Debra James on 11 April 1981. The marriage ended in divorce in 1988. He met actress Melanie Hill at RADA, and they married on 27 February 1990. The couple's first daughter, Lorna, was born in October 1987; their second, Molly, was born in September 1991. Bean and Hill's marriage ended in divorce in August 1997.

During the filming of Sharpe, Bean met actress Abigail Cruttenden, and they married on 22 November 1997. Their daughter, Evie Natasha, was born in November 1998. Bean and Cruttenden divorced in July 2000. Bean began dating actress Georgina Sutcliffe in 2006. After cancelling their planned January 2008 wedding on the eve of the ceremony for "personal reasons", Bean married Sutcliffe at the Marylebone Register Office in London on 19 February 2008. Amid allegations that Bean physically abused Sutcliffe in 2009, domestic disturbances resulted in the police being called to their home in Belsize Park on three occasions. Bean and Sutcliffe's separation was announced on 6 August 2010, and the divorce was finalised on 21 December 2010. On 9 May 2012 Bean was arrested over claims he made harassing phone calls and sent abusive text messages to Sutcliffe and was later released on bail. All charges were subsequently dropped.