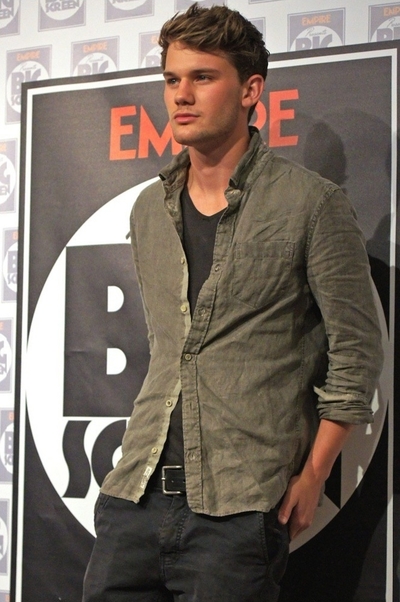 Jeremy Irvine (born Jeremy Smith; July 1990) is an English stage and screen actor. In late 2011, Irvine starred as the leading character in the epic war film War Horse directed by Steven Spielberg and based on an adaptation of Michael Morpurgo's children's novel War Horse was nominated for six Academy Awards, two Golden Globe Awards and five BAFTAs. The movie became a box office success and turned Irvine into an overnight film star. He also earned widespread critical acclaim for his role in the independent film Now Is Good. This has led to critics listing him among Hollywood's fastest-rising stars. He received critical praise by earning a reputation as a method actor after he went for two months without food and by performing his own torture scene stunts in the film adaptation of The Railway Man.

In 2012, Irvine portrayed Pip in the adaptation of Charles Dickens's Great Expectations, directed by Mike Newell, alongside Ralph Fiennes and Helena Bonham Carter. In 2014, he starred in A Night in Old Mexico and the film adaptation of the novel The World Made Straight. He will star as Harry Burnstow in the 2015 film The Woman in Black: Angels of Death, and as Percy Bysshe Shelley in the upcoming biopic Mary Shelley's Monster.

Irvine was brought up in Gamlingay, Cambridgeshire. His mother, Bridget, is a politician in local government, and his father, Chris Smith, is an engineer. Irvine also has a little brother, Toby Irvine, a child actor, who portrays the young Pip in Great Expectations. Irvine's stage name comes from his grandfather's first name. Irvine applied to the army at the age of nineteen, but was rejected after lying about his diabetes on his application.

Irvine started acting the age of sixteen. He played Romeo along with other main roles in plays whilst attending Bedford Modern School in the Harpur area of Bedfordshire, followed by the National Youth Theatre and a one year foundation course at the London Academy of Music and Dramatic Art (LAMDA). After completing this course, Irvine spent two years posting CVs through letter boxes in an effort to get acting work. Irvine almost gave up acting for good just before he got his big break in War Horse. In an interview with CBS News while promoting Great Expectations, Irvine described this as the lowest point of his life and he considered taking a different career path: "I'd kind of hit rock bottom and really did think this was stupid and I just wasted three or four years of my life. My dad wanted me to get a job being a welder. At the company he was at, he was an engineer. I was very very close to doing that."

Irvine started off teaching at an acting school, though this company has since closed. Irvine played the role of Luke in the television series Life Bites and appeared with the Royal Shakespeare Company in the 2010-production of Dunsinane Irvine was quoted in Interview magazine as saying "My friends all took the mick out of me for [Dunsinane], saying, 'You're gonna be the tree' … Indeed, in my first scene, I was waving two branches."

In June 2010, Irvine was cast to play the lead character in the Steven Spielberg film War Horse, released in December 2011. The film was an adaption of Michael Morpurgo's novel, also entitled War Horse. Irvine was selected to play Albert Narracott, the main character, alongside other British actors, including Peter Mullan and Emily Watson—as Albert's father and mother, respectively. During production of the film, Irvine began to be represented by the Creative Artists Agency from July 2010, in addition to agents Hatton McEwan in the United Kingdom.

Irvine has had diabetes mellitus type 1 since the age of six and was involved in trials with the Juvenile Diabetes Research Foundation (JDRF) to test an artificial pancreas; a form of automatic glucose meter attached to a portable insulin pump. The tests took place at Addenbrooke's Hospital with the University of Cambridge during 2005 and 2007.

Off-screen, Irvine avoids the media spotlight and tries to maintain privacy. He has been quoted as saying: "I realised very quickly that I didn't want to be famous, so I don't go to Mahiki, I just go down the pub with all my mates." When asked about his rising fame, he said: "When War Horse came out, I had maybe a month of people stopping me in the street, then it died down. I try to ignore all that and pretend none of it exists. We're only acting. The work my mum does, a lot of it is re-housing homeless people, that's a real job. I play make-believe and dressing up for a living!" In an interview with Daily Mail while promoting War Horse, Irvine described his ideal life: "There's nothing nicer than coming back to your village, where people like my mum's friends take the mick out of me. I prefer that to the craziness of Hollywood." He is also well known for turning down big teen franchise films and has been described as Hollywood's most wanted actor.