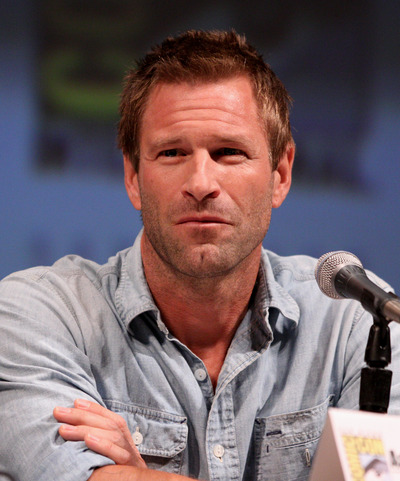 Born in California, he moved to England at the age of 13, when his father relocated the family. Several years later, he began his acting career by performing in school plays, before moving to Sydney, Australia, for his high school senior year. He left high school without graduating, but earned a diploma through an adult education course, and graduated from Brigham Young University in 1994 with a Bachelor of Fine Arts degree in film. For much of the mid-1990s, he lived in New York City as a struggling, unemployed actor. As an undergraduate at Brigham Young, Eckhart met director and writer Neil LaBute, who cast him in several of his own original plays. Five years later Eckhart made a debut as an unctuous, sociopathic ladies' man in LaBute's black comedy film, In the Company of Men(1997). Under LaBute's guidance he worked in the director's films, Your Friends & Neighbors (1998),Nurse Betty (2000), and Possession (2002).

Eckhart gained wide recognition as George in Steven Soderbergh's critically acclaimed film, Erin Brockovich(2000), and in 2006 received a Golden Globe nomination for Best Actor for his portrayal of Nick Naylor in Thank You for Smoking. Another mainstream breakout occurred in 2008 when he starred in the blockbuster Batman film The Dark Knight as District Attorney Harvey Dent. Other key roles include The Pledge (2001), The Core (2003) and Rabbit Hole (2010).

Eckhart was born in Cupertino, California, the son of Mary Martha Eckhart (née Lawrence), a poet and children's author, and James Conrad Eckhart, a computer executive. He is the youngest of three brothers. His father was of German (including German-Russian) descent, while his mother was of English, Scottish, Northern Irish, and German ancestry. He was raised as a member of The Church of Jesus Christ of Latter-day Saints (LDS Mormon), and served a two-year LDS mission in France and Switzerland.

Eckhart's family relocated to England in 1981, following his father's job in information technology. The family resided in Surrey, South East England, first in Walton-on-Thames, later moving to Cobham. While living in England Eckhart attended American Community School, now known as ACS International Schools, where he was first introduced to acting, starring in a school production as Charlie Brown. In 1985 he moved to Sydney, New South Wales, Australia, where he attended American International School of Sydney for his high school senior year; he further developed his acting skills in productions like Waiting for Godot, where he admits that he did a "terrible" production. In the fall of his senior year Eckhart left the school in order to take a job working at a mall movie theater. He eventually earned his diploma through an adult education course. This also allowed Eckhart time to enjoy a year of surfing and skiing in Hawaii and the coastal waters of France. In 1988, Eckhart returned to the United States and enrolled as a film major at Brigham Young University–Hawaii, but later transferred to Brigham Young University (BYU) in Provo, Utah. He graduated in 1994 with a Bachelor of Fine Arts degree.

While at Brigham Young University, Eckhart appeared in the Mormon-themed film, Godly Sorrow, and the role marked Eckhart's professional debut. At this time he met director/writer Neil LaBute, who cast him in several of his own original plays. After graduating from BYU, Eckhart moved to New York City, acquired an agent, and took various occasional jobs, including bartending, bus driving, and construction work. His first television roles were in commercials. In 1994 he appeared as an extra on the television drama series, Beverly Hills, 90210. Eckhart followed this small part with roles in documentary re-enactments (Ancient Secrets of the Bible: Samson), made-for-television movies, and short-lived programs like Aliens in the Family.

In 1997 Eckhart was approached by Neil LaBute to star in a film adaptation of LaBute's stage play, In the Company of Men. He played a frustrated white-collar worker who planned to woo a deaf office worker, gain her affections, then suddenly dump her. The film, his first feature to reach theaters, was critically well received, with Desson Howe of The Washington Post reporting that Eckhart is the "movie's most malignant presence" and that he "is in chilling command as a sort of satanic prince in shirtsleeves". In the Company of Men was a critical success, winning Best First Film at the 63rd annual New York Film Critics Circle Award. His performance won him the Independent Spirit Award in the category of Best Debut Performance. The film was ranked as one of "The 25 Most Dangerous Movies" by Premiere magazine.

Eckhart once was engaged to actress Emily Cline whom he met during filming of In the Company of Men, but they separated in 1998. He always has been reluctant in speaking about his relationships in interviews. Eckhart dated country music songwriter and member of SHeDAISY, Kristyn Osborn, from 2006-2007. He appeared in the group's video for their single, "I'm Taking the Wheel".