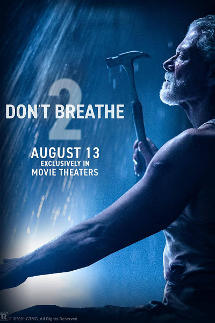 In 2016’s Don’t Breathe, Norman Nordstrom (Stephen Lang) was underestimated by everyone because of his blindness, but ultimately revealed an unflinching will to survive and get what he wants… and a monstrous, evil side of his personality. Now, in Don’t Breathe 2, eight years have passed, and Nordstrom has recreated the family stolen from him by a drunk driver and found the twisted justice he’s always felt was his due. When intruders once again come to his home, this time focused on his 11-year-old daughter, Norman will reveal for a second time what’s hidden inside him, in new and unexpected ways.